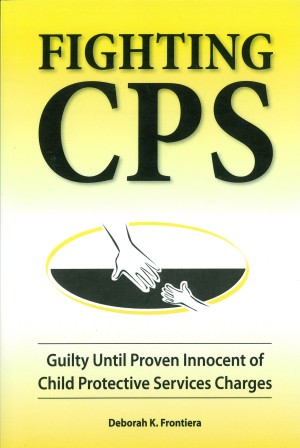 By Deborah K. Frontiera
An in-depth story about one family's ordeal with the Texas Child Protective Services department after a false allegation of child abuse. More
Fighting CPS: Guilty Until Proven Innocent of Child Protective Services' Charges chronicles thirteen months of agony and frustration suffered by the innocent Bonilla and Frontiera families as a result of Children's Protective Services removal of young James Bonilla from his parents. Most people are not prepared to navigate the maze of sometimes senseless procedures of a government agency that has too much power. The Frontiera and Bonilla story and reports of several other cases across the country should be a wake-up call to a public unaware of how the state agencies charged with protecting the nation's children are failing. Interviews with lawyers, caseworkers, and others who work within the system, point out specific steps that should be taken to improve how these agencies work. The author issues a call to action from the public to charge all levels of government to make necessary changes in these agencies. They must protect children from abuse and neglect without persecuting innocent families.
Available ebook formats: epub mobi pdf rtf lrf pdb txt html
First 20% Sample: epub mobi (Kindle) lrf more Online Reader
pdb
Price: $4.99 USD
Buy Add to Library Give as a Gift
How gifting works
Create Widget
Tags: cps false allegations parental rights childs wellbeing
About Deborah K. Frontiera

Deborah Frontiera grew up in Michigan’s Upper Peninsula. She began her teaching career in Houston ISD in 1985 and was chosen for Houston I.S.D.’s Project A.C.C.E.S.S. writing curriculum in 1988. Twice during her teaching career, she was named Teacher of the Year by her colleagues. Her fantasy trilogy, The Chronicles of Henry Roach-Dairier, was first printed in the fall of 2000. A second edition was released in the fall of 2004. Eric and the Enchanted Leaf: The First Adventure, released in the fall of 2004, was an Honor book for the Texas State Reading Association’s Golden Spur Award in 2005. The second in the series, Eric and the Enchanted Leaf: A Visit with Canis Lupis, won the North Texas Book Festival’s award for a children's book in 2007. The third in the series, Eric and the Enchanted Leaf: A Night with Echo, came out in Dec. 2007. All three of these, and a fourth title, Eric and the Enchanted Leaf: When Earth Grows Warmer, are now available as “apps” for iPad, iTouch, etc., through Pic Pocket Books. A middle grade historical fiction novel, Living on Sisu: The 1913 Union Copper Strike Tragedy received First Place for historical fiction in the Purple Dragonfly Awards given by the Arizona Authors Association in conjunction with Five Star Publications. A new book, adult nonfiction this time, Fighting CPS: Guilty Until Proven Innocent of Child Protective Services Charges, is set for release in January 2012. Her poems and articles have appeared in a variety of publications. She retired from teaching in Houston ISD in 2008 and now teaches part time for Houston’s Writers In The Schools program. Because her books and experience are varied, she is able to address school audiences from pre-school through high school as well as adults. Visit her website at: www.authorsden.com/deborahkfrontiera

You have subscribed to alerts for Deborah K. Frontiera.

You have been added to Deborah K. Frontiera's favorite list.

You can also sign-up to receive email notifications whenever Deborah K. Frontiera releases a new book.