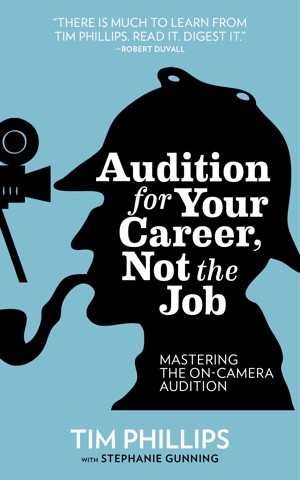 Audition for Your Career, Not the Job: Mastering the On-camera Audition

A complete guide for actors on how to craft auditions for film and TV, from Los Angeles-based master acting coach Tim Phillips, creator of the Sherlock Holmesing the Text® method. More
"Those who read this book will find that there is much to learn from Tim Phillips. Read it. Digest it. You'll be very well informed and find yourself a better student of the subject at the end."
—Robert Duvall, Academy Award-winning actor, Tender Mercies, Emmy Award-winning actor, Broken Trail, writer, director, and producer

"An instructive, no nonsense, passionate cry to the actor: Bring your intelligence and humanity to the audition not your desperation."
—Larry Moss, author of The Intent to Live

You've got a big audition lined up for a role in a film or on a television series. What do you do now? This book covers steps you can take and specific skills you can put to use right away so that you will feel more confident about your performance in your next audition and make a great and lasting impression on casting directors and producers. If your work is consistently first-rate and memorable, every on-camera audition like this one becomes an opportunity to advance your acting career.

The quality of your work is the only thing under your control, and it's important to approach your work in a way that feels fun and rewarding. If you learn the habits described in this book, the possibility of not being chosen literally won't be able to shake your confidence before, during, or after an audition.

Audition for Your Career, Not the Job will positively change your on-camera auditions by teaching you skills that improve your ability to read and interpret the sides quickly, helping you to trust your instincts and make strong, bold, specific acting choices, and setting you up for an active and profitable career.

Tim Phillips, founder of The Tim Phillips Studio, is an on-camera audition coach based in Los Angeles. A former actor and theatre director, in 1983 he established his studio in New York, where he taught principles of acting based upon The Meisner Technique. Since then, he has ignited the careers of Emmy Award-winner Richard Schiff, Emmy Award- and Golden Globe Award-nominee Wendie Malick, Nancy Travis, Roma Maffia, Robert Wisdom, and thousands of other actors. He has also coached Justin Timberlake, Molly Simms, Jayne Brook, Joanne Baron, Justin Chatwin, and Kate del Castillo. Tim has personally coached 35,000 auditions in the last twenty-five years. Over 70 percent of his students book roles from the audition scripts they bring into his class to prepare. Many of his current and former students have been casted as series regulars, recurring characters, and top-of-show guest stars on television and in feature films.

Tim's highly acclaimed Sherlock Holmesing the Text® method of script analysis is the foundation of his on-camera audition technique. In combination with his unique tools for crafting, his method is one of the most comprehensive and revolutionary approaches to auditioning ever made available to professional actors working in film and television. As a speaker, he regularly tours the country lecturing at colleges and universities. He is the creator of the audio Tim Phillips' Studio Audition Technique (CD) and companion video series to this book, Tim Phillips' On-camera Audition Technique: Sherlock Homlesing the Text® (DVD 1) and Tim Phillips' On-camera Audition Technique: Crafting (DVD 2).

You have subscribed to alerts for Tim Phillips.

You have been added to Tim Phillips's favorite list.

You can also sign-up to receive email notifications whenever Tim Phillips releases a new book.