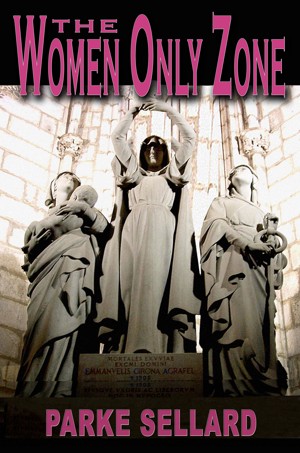 The Women Only Zone

The residents of WOZ are tightly controlled by the “supplements” they’re given in their food. The government even listens in on citizens’ thoughts. Even reproduction is tightly controlled, and nearly all Y-chromosome fetuses are terminated. The remaining men are kept on “starter farms” where their sperm is harvested and used to impregnate First Mothers.

Dr. Parke Sellard comes from a family of musicians and teachers. He grew up during the Depression in a small town in the Southwest. He enlisted in the Army at age 17 and was a foot soldier in World War II. He graduated from a college in the South and was trained as an optometric physician in Southern California and Houston, Texas.

He has four degrees, including a MA in psychology, and he went to both optometry and medical school. He is also a licensed pilot and figure skates. He currently lives in the Monzano Mountains east of Albuquerque, New Mexico.

Retired from practice, he now writes novels. His books include: Susan’s Violin, The Boswell Gene, The Glass Fish, Three Score and Ten, Twilight Journey, The Solid Brick House and WOZ.

He is currently writing a story called, “Love Me, Love Me Not,” about a woman who was "done wrong" by a fellow when she was young and is out to get even by making men pay for every attention she gives them. She eventually has to choose between a rich man and a man she loves.

Reviews of The Women Only Zone by Parke Sellard

You have subscribed to Smashwords Alerts new release notifications for Parke Sellard.

You have been added to Parke Sellard's favorite list.

You can also sign-up to receive email notifications whenever Parke Sellard releases a new book.