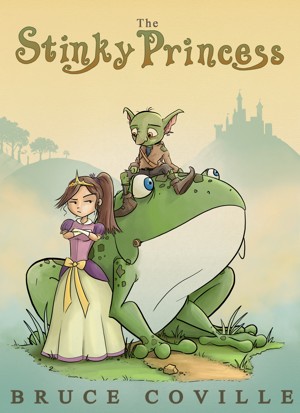 By Bruce Coville
What happens when a perfectly proper princess becomes fascinated by a fairly stinky goblin? Well, among other things, a trip to Nilbog, the underground world of the goblins. Not to mention advice from an ancient gobliness, a ride on a very large frog, and a trip to the Lake of Fire! More
This story first appeared in ODDER THAN EVER (Harcourt, 1999). It has since had staged versions at LeMoyne College and Boskone.
Available ebook formats: epub mobi pdf rtf lrf pdb txt html
First 70% Sample: epub mobi (Kindle) lrf more Online Reader
pdb
Price: $0.99 USD
Buy Add to Library Give as a Gift
How gifting works
Create Widget
Tags: romance humor fantasy satire princess underground goblin
About Bruce Coville

Reviews of The Stinky Princess by Bruce Coville

You have subscribed to alerts for Bruce Coville.