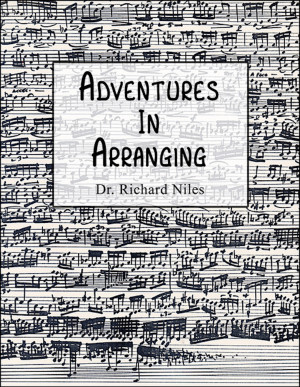 “My professional life has been amazing because I understood that the only difference between a job and an adventure was attitude.”

His uniquely humorous method of teaching not only delivers essential tools, but encourages you to think, explore, and discover your own inner voice to develop a personal style. The exercises stress that there is more than one way to solve a musical challenge, demonstrating that orchestration, voicings, harmonic and melodic techniques are, like a piano, only an instrument to express your ideas. Beyond a host of arranging techniques and analysis, Niles gives inspiring real-word advice and insider tips from 45 years on the ‘killing floor’ of the recording studio - how to work with record companies, songwriters, artists, managers and producers.
60 musical examples with audio files that can be accessed online, streamed or downloaded.

"Richard Niles is a great arranger and musician and was a great pleasure to work with.”
Paul McCartney
"When you are talking musical pedagogy, Richard Niles is the daddy. He explains the mechanics of music better than anyone else…Not only does Niles know what he’s talking about, he imparts his knowledge with clarity and certainty."
The Times (London)
“Richard Niles comprehensively covers the various aspects of arranging - a must for every aspiring arranger and a very useful resource for anyone already advanced in this field.”
Chris Walden (5x Grammy Nominated Composer/arranger)

CDs as composer/guitarist/leader include Hi-Tek, Santa Rita and Club Deranged. He has led his jazz orchestra, BANDZILLA since 1986 and has released two CDs, BLUE MOVIES and BANDZILLA RISES!!! and performed with Paul McCartney, Pet Shop Boys, Leo Sayer and Randy Brecker. (www.bandzilla.net). Niles has also worked with Don Peake and The Wrecking Crew All Stars.

You have subscribed to alerts for Richard Niles.

You have been added to Richard Niles's favorite list.

You can also sign-up to receive email notifications whenever Richard Niles releases a new book.