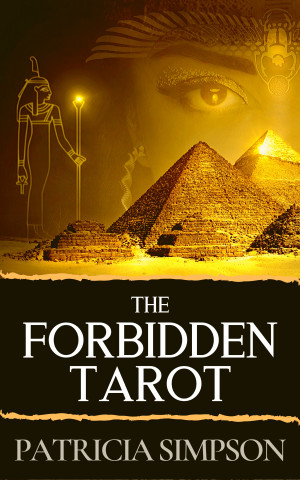 One look at the Forbidden Tarot, and Rae's life takes an eerie turn. Can Rae stop the evil she has accidentally unleashed? If not, the world will be in serious danger from a vengeful entity.

Travel the dark path of the Forbidden Tarot as unsuspecting people look at the deck and meet their demons—from a quaint island town in California, to an archeological dig in the Sierra Mountains, and finally to a ancient monastery in Greece.

THE DARK LORD
Former school chums, Rae and Michael must put aside old wounds when they discover Michael's father might have been murdered—and the souvenir deck of cards from Rae's Egyptian vacation could be the reason the old man is dead.

THE DARK HORSE
Back country guide Jack Hughes has a problem. He has been hired by a software billionaire and his oddly-sentient fiancée to find an ancient fountain-of-youth in the California wilderness. Trouble is, he can't let anyone discover his secret self.

THE LAST ORACLE
An oracle-on-the-run staggers into the life of a troubled aeronaut trying to beat a world record and asks him to help her save a mysterious child.

Patricia Simpson is described by reviewers as “a premier writer of supernatural romance.” Author of numerous paranormal novels, she is inspired by science, paranormal phenomena, and archeological discoveries, and consistently garners superior ratings and awards for unusual heroes and unpredictable plots. Simpson has been called “a master at keeping suspense going on a multitude of levels,” and a “masterful storyteller.”

From Egyptian lords that shape-shift into black panthers to Scottish time-travelers who step out of computers, Simpson entertains readers while pushing the envelope in paranormal suspense. Her new trilogy, THE FORBIDDEN TAROT, goes further than anything she’s written before. This series explores a new world history and impending planetary disaster. Already some reviewers have called the first book in this series, THE DARK LORD, a “true gift to her readers,” and a “lulu of a story.”

Patricia’s favorite writing arenas are the Pacific Coast, the deep South, 18th century in America and Great Britain, ancient Egypt, Pacific Northwest Native Americans, and anything that goes bump in the night.

You have subscribed to alerts for Patricia Simpson.

You have been added to Patricia Simpson's favorite list.

You can also sign-up to receive email notifications whenever Patricia Simpson releases a new book.