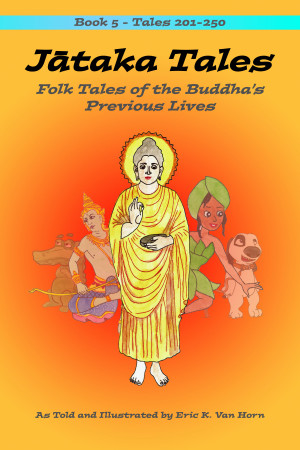 By Eric Van Horn
The Jātaka Tales are the Buddhist equivalent of Aesop’s Fables. This collection contains stories 201-250 from the total collection of 547 stories. The original translations of these stories have been updated for a modern audience. Each story contains notes about special features as well as an illustration. The goal is to make this literature fun and useful for Buddhists and non-Buddhists alike. More
The Jātaka Tales are the Buddhist equivalent of Aesop’s Fables. They are morality stories. In the Buddhist cultures of that time, these were the stories that children grew up hearing. They were the popular entertainment of their time. Families would gather together in the evening after the day’s work was done and share these tales. And it is from these stories that people learned about the standards of conduct for followers of the Buddha.

Like Aesop’s Fables, the main characters in these stories can be a king, a merchant, a craftsperson, or an animal. This collection contains stories 201-250 of the 547 total stories. There are a number of stories about respect for one’s elders. Jātaka 202 even finds Sakka the God terrorizing a King who has mistreated elders. Jātaka 237 repeats the story of Jataka 68 in which the Buddha tenderly shows respect for his parents from previous lives.

The longest story in this collection is Jātaka 234 in which a musician takes care of his blind parents. It has a lovely scene in which the musician asks to be paid for his music by hearing the stories of devas who have been reborn in heaven due to their kindness.

And, of course, there are many stories involving monkeys! In some of these the monkey is a villain, but they can also be the heros. In Jātaka 222 it is the Buddha himself who is a self-sacrificing monkey and who tries to save his mother from a hunter.

In all, these stories represent the breadth the human experience. What we see is that in 2500 years, the spectrum of experiences has not changed at all.
Download: epub
Price: Free! USD
Add to Library
Create Widget
Tags: buddhism jtaka tales
About Eric Van Horn

Eric Van Horn was born and raised in Lower Pottsgrove, Pennsylvania. He graduated Pottsgrove High School in 1970 and went to college at Goddard College in Plainfield, Vermont. He graduated from Goddard in 1973 with a B.A. in Liberal Arts. His senior thesis was about his experience as a community organizer for a drug abuse prevention program in Pottstown, PA.

After graduation he worked in a number of social service jobs, but eventually discovered a love of computer programming. He spent the next 33 years working as a software engineer. In his last job he spent 18 years working in the field of medical informatics at the PKC Corporation in Burlington, Vermont. He retired from PKC in 2011 to devote his life to his Buddhist practice.

His interest in Buddhism began in 1991 when he attended a "spiritual support group" at the Burlington Unitarian Church. Over the next 20+ years he attended many retreats at the Insight Meditation Center in Barre, MA, the Barre Center for Buddhist Studies in Barre, MA, the Zen Mountain Monastery in Mt. Temper, NY, the Omega Institute in Rhinebeck, NY, the Bhavana Society and Monastery in High View, WV, the Embracing Simplicity Hermitage in Asheville, NC, Kharme Choling in Barnet, VT, and Maple Forest Monastery in Woodstock, VT. He went to India on Buddhist Pilgrimage in 2004.

He moved from Vermont to New Mexico in 2014 because it was "sunnier, warmer, and cheaper." He also found a living situation that is quieter and more conducive to meditation. He has an ongoing love of the Land of Enchantment, its rich cultural heritages, breathtaking landscapes, and ancient history. He has two adult children, Seth and Rebecca, a daughter-in-law Britomarte, a grandchild Jay, and a virtual son-in-law Toby.

About the Series: Jātaka Tales: Folk Tales of the Buddha's Previous Lives

The Jātaka Tales are part of the Pāli Buddhist Canon. They are the tenth volume in the Khuddaka Nikāya (“Minor collection”) which is the fifth of the five collections in the Canon. They are the Buddhist equivalent of Aesop’s Fables. They are morality stories. By tradition these are the stories of the Buddha’s previous lives. In the Buddhist cultures of the past, these were the stories that children grew up hearing. They were the popular entertainment. Families would gather together in the evening after the day’s work was done and share these tales. And it is from these stories that people learned about the standards of conduct for followers of the Buddha.

You have subscribed to alerts for Eric Van Horn.

You have been added to Eric Van Horn's favorite list.

You can also sign-up to receive email notifications whenever Eric Van Horn releases a new book.