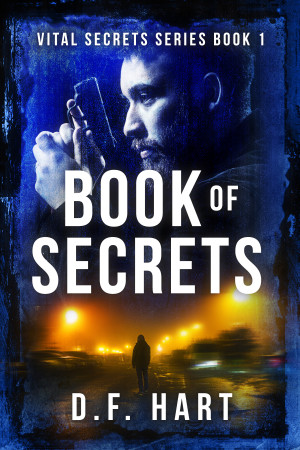 FBI profiler Nathan Thomas and fiancée Bella Amsel begin to mend their lives after the horror and loss of kidnapping and murder.

Little do they know the horror is only beginning.

The psychopath obsessed with Bella isn’t giving up that easily.

D.F. Hart is my pen name for suspense/thriller works. (For contemporary romance you'll find me under Faith Hart). I've never found my first name to be particularly suspenseful or mysterious, so when I opted to finally give in to the siren call of writing, using my initials felt as natural as breathing.

I’d always intended to be in this career; a college professor teaching Chaucer and Shakespeare somewhere and writing fiction in my off time. However, life has a sense of humor, it seems. Before I even realized it, I found myself hip deep into a career in Accounting – just about as far left-brained as you can get from being an author. I went with that flow and obtained my MBA with Accounting concentration to augment what I’d learned ‘in the trenches.’ I’m going on my twenty-fifth year of ‘crunching numbers’; I like it and I am good at it. But it has never been my passion, and it never will be.

In 2009, the pull to write became overwhelming. I’d had the plot idea for “Wall of Secrets” since 1989, but until I approached my fortieth birthday had been too timid to get it out of my brain and onto paper. I finally decided I’d wasted enough time. If nothing else ever came out of it, I would at least walk that fire path and put this story out into the world. “And the Wall Came Down” was the original title of the result.

By late 2018, I felt I’d told a good first story back then, a unique one, a gripping one, even if it is a bit 'draggy' in the beginning (a necessary evil, I felt, to properly set the stage). But it seemed a shame to just end it there. So, I picked up the loose threads I’d deliberately left at Wall’s conclusion ten years prior, and started weaving the sequel, re-titling book one along the way. “And the Wall Came Down” became “Wall of Secrets”, the history-and-backstory rich prequel to the Vital Secrets series, and its sequel, “Book Keepers”, morphed into “Book of Secrets“.

2019 also brought with it a unique opportunity to truly ‘go indie’, and I seized the chance and haven’t looked back. The advent of the third title in the Vital Secrets Series, “List of Secrets“, firmly set the path for a ensemble cast of characters whose lives develop and grow throughout the series while battling bad guys and catching killers.

About the Series: Vital Secrets 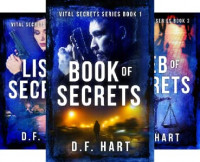 The Vital Secrets series follows an ensemble cast of characters whose lives develop and grow throughout the series while battling bad guys and catching killers.

Reviews of Book Of Secrets: Vital Secrets Book One by D.F. Hart

You have subscribed to Smashwords Alerts new release notifications for D.F. Hart.

You have been added to D.F. Hart's favorite list.

You can also sign-up to receive email notifications whenever D.F. Hart releases a new book.