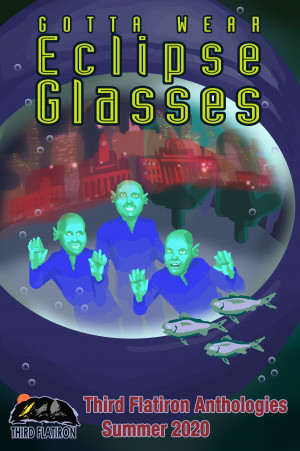 By Third Flatiron Publishing
Rated 4.00/5 based on 1 review
The future we all want.

Twenty authors contribute short science fiction and fantasy stories about
their visions of a brighter future. More
The future we all want.

Twenty authors contribute short science fiction and fantasy stories about their visions of a brighter future.

Explore how life might change with increasing use of social media, artificial intelligence, virtual reality, space exploration, and medical advances. Envision worlds where climate change can be mitigated through technology, and war is a thing of the past. Third Flatiron's "Gotta Wear Eclipse Glasses" offers new opportunities
to boldly go where none have gone before.

‘Gotta Wear Eclipse Sunglasses’ is an anthology of optimistic science fiction and fantasy from Third Flatiron publishing. It’s available from Smashwords as an eBook on a very enlightened pay-what-you-want basis or from Barnes and Noble as a pay $4.95 Nook Book or from Amazon as a paperback. Check the website for links. Choose what suits you but bear in mind that writers need money to buy food and shoes for their small, cute helpless children.

A strong start to the fiction with ‘Living As You, Our City a Garden’ by Christopher Muscato. In a not too distant future, much of mankind is living under the sea, breathing with gills thanks to genetic adaptations. Kids asking questions is a great way to do exposition so we follow Sosh and Mina on a trip to the city to inspect their families part of the power grid, floating solar panels and turbines. Some people still live on the surface and there’s an alarming encounter with such a group. Most of the interest was in the society portrayed and it had the atmosphere of a good Asimov juvenile.

Merchant bankers work in the Reingold Tower including our hero Alison. One day she accidentally presses the button for the thirteenth floor but the lift won’t stop there. Curiosity aroused, she investigates. I enjoyed ‘The Thirteenth Floor’ by Robert Bagnall as a story but the premise was just too unbelievable. I’m prepared to swallow aliens, FTL drive, time travel, alternate universes, wizards and elves but ethical merchant bankers?! No way.

‘Catcher in the Sky’ by Paul A. Freeman is a solid science fiction piece about a government official visiting a carbon capture machine but the only thing making it a story is the bit tacked on at the end. ‘Such Sweet Sorrow’ by Gustavo Bondoni is a nice story about saving giraffes but again lacks drama. However, drama isn’t everything and much of the pleasure of science fiction is in clever gadgets and social change.


Why would a man perform his ablutions in Hyde Park and bury them when there are public toilets all around? That’s the question facing Detective Thato Choudry and his AI implant Sammi in ‘The Centaur Detective and the Vanishing Man’ by Patrick Hurley. Thato is called the centaur by his colleagues because he’s the first on the team to have an AI implant but it works well and Sammi is just like a real cop buddy. Here’s a future where everyone has a smartcell implanted at birth which self-replicates to release vaccines, kill viruses and monitor pre-cancerous cells. The suspect doesn’t have one smart cell in his body. Very odd. Clever story and good characters. The Centaur Detective could be a series.

The next two pieces are about not engaging with the real world. In ‘All Fuzzed Out and Fractal’ by David Cleden a tech assistant named Surita Nair adjusts her VR specs to make her boss look like a warthog. The VR specs make reality tolerable but when you take them off...dear me! I’ve read at least one other story with this theme but it’s worth repeating. A different kind of paradise, more than skin deep, features in ‘Give Me My Wings’ by Eneasz Brodski. Artificial intelligences have solved all mankind's problems and Marie is just killing time until she’s uploaded to the Cloud, not fully enjoying life as a human. Sad, I thought, reading utopian visions on my Kindle.

Perhaps pairing is an editorial theme because the next two stories concern souls. In ‘Tabula Rasa’ by Emily Martha Sorensen, Ally wakes up after a skiing accident to find herself in a new body. Her parents are well off and got her cloned. But is she the same person? ‘Soulshine’ has antisocial gamer nerd Tish given the opportunity to test a new product which involves interpersonal relations rather than shooting VR bugs on the streets. This is the second story I’ve read lately by author Koji A. Dae and they’ve both been quirky and interesting. One to watch.

In ‘Lighter Than Air’ by Liam Hogan Teenage Vlogger Jess Silver gets to go on a diplomatic mission to visit aliens. There are ambassadors and scientists along for the ride but she’s the VIP because theA-Gees love her vlog. The Aero-Gels live in floating cloud cities and are cleaning up Earth’s atmosphere in return for the right to co-inhabit our fair planet but not much is known about them. Enjoyable old style SF. What is a vlogger anyway?

Author Mike Adamson portrays a ruined Earth in ‘The First Day of Winter’. Kira Lytton was born on Drift Station Pelagus which was caught in the Antarctic Circumpolar Convergence. An environmental suit is needed to go outside as the planet no longer supports human life. Can that be changed? Drama and conflict in this densely written, science rich story.

What to do with all the space junk now orbiting Earth? That’s the question addressed in ‘We Make Life Beautiful Again’ by Alexandra Seidel in which ScraMA is launched, a robot with a smart artistic AI attached. ScraMA stands for Scrap Metal Artist. Simultaneously, TruMind is activated elsewhere in the world, the first quantum computer. Then they start chatting and ignore human commands. Cleverly told in epistolary fashion.

The book closes with ‘Grins and Gurgles’ (flash humor). I enjoyed ‘Interview with a Zombie’ by Ville Nummenpää and I liked ‘The Plumber’ by Matt Tighe. ‘Night Chat’ by John Kiste was entertaining but best of all was ‘For Mom: Standup Cosmic Comedy’ by Mariev, Erie Matriarch because the jokes were silly. Should be a big hit with fans of the British quiz show Pointless in which the Periodic Table often features.

An anthology of optimistic SF is timely in the dark days of coronavirus. There’s a risk that happy endings preclude real drama but the writers coped with that. All in all, a worthy volume and very readable. The comedy at the end capped it off nicely.

(reviewed 7 months after purchase)
Lela Buis reviewed on July 18, 2020
(no rating)
This anthology is mainly short stories about the future with a positive theme. Some focus on how climate change might be mitigated, or how war might become obsolete. One story is about reintroducing endangered species to the wild, and another gives us a replacement clone for a dead child. Although all these stories are entertaining takes on the future, a couple of them really stand out as haunting. In “To the Stars and Beyond” by Chloie Piveral, a youngster on a colony ship goes on a search for soil to place in her dead aunt’s coffin. And in “Just Like Living with Dad” by Jenny Blackford, we encounter transmigration and ghostly goldfish. Recommended.