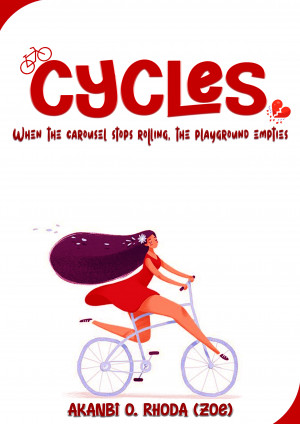 By Akanbi Odunayo Rhoda (Zoe)
Cycles is a compilation of lofty poems inspired by the personal fluctuating un-arithmetic experiences of life and love — the actuality, the flux, the circles of it. More
CYCLES BLURB

Life is a voyage, and you can only define in retrospect. Who could discern the dart that would hit the bull's-eye, the cigarette that triggered cancer problems, or the sip of liquor that started drunkenness. There's no arithmetic to living— no one could mark the distinct thin-line methodologies of life.

Cycles is a compilation of lofty poems inspired by the personal fluctuating un-arithmetic experiences of life and love — the actuality, the flux, the circles of it.
Aimed at expressing the beautiful and the ugly, the melancholic along with the ecstatic perceptions to the theme.

Akanbi Odunayo Rhoda known as Zoe in the writing world is more than a writer.

She is a juggler. One may say she is a jack of all trades, master of none, perhaps all.

She is an amazing prose writer and poet. With numerous poems,anthologies novels and flash fictions to her name, she thrives on exploring the nooks and crannies of literature.

She is an avid reader and lover of classics. There is a book she will give her arm for: Wuthering Heights. You can find some of her book reviews on her Instagram page and her blog too.

She is also a budding graphic designer. Stuck with Canva, she created these beautiful invite cards for her book launch.

She is also an undergraduate law student of the University of Lagos.

Her works has appeared and received recognition in different literary channels such as Creative Writers Magazine, Samson Abanni Poetry Contest2019, Wakaso Poetry Prize, Poetry 101 anthology on Redemption, The Invincinble Quill Magazine, Earnest Writes Community and Door is a Jar Magazine where her poem _Girl With No Dreams_ is awaiting publication.

A recipient of a couple of literary awards such as TaleMongers poet of the week, Talemongers Christmas Tale Special, 1st runner up for EWC Official vote and many more, Zoe is a writer whose works exudes her pseudonym: giving life.

Her first poetry anthology was read and review by various writers and readers, and ended up being the Anthology of the Week in Talemongers Poets.

Cycles is her second anthology.

Would you like to favorite Akanbi Odunayo Rhoda (Zoe)?

You have been added to Akanbi Odunayo Rhoda (Zoe)'s favorite list.