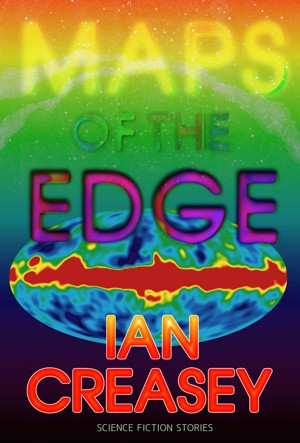 Maps of the Edge

By Ian Creasey
Rated 5.00/5 based on 1 review
This book contains 17 science fiction stories, all previously published in magazines such as Asimov's.

In the opening story, "Erosion" (which featured in three Year's Best anthologies), a cyborg road-tests his new body before leaving Earth for the stars. The remaining tales range from post-apocalypse archaeology to galaxy-spanning bureaucracy, via wacky inventors and lovestruck corporations. More
This book contains seventeen SF stories, all previously published in magazines such as Asimov's Science Fiction.

Ian Creasey lives in Yorkshire, England. He began writing when rock and roll stardom failed to return his calls. His first story was published in 1999, and since then he has sold numerous stories to various magazines and anthologies. His spare time interests include hiking, gardening, and environmental conservation work... anything to get him outdoors and away from the computer screen.

His books "Maps of the Edge" (2011) and "Escape Routes from Earth" (2015) are collections of science fiction stories originally published in well-known SF magazines such as Asimov's Science Fiction and Daily Science Fiction.

For a free sample story, download "The Prize Beyond Gold".

Reviews of Maps of the Edge by Ian Creasey

This is a collection of short stories, published previously in different SFF magazines, most notable Asimov’s SF. It is on the pages of the latter I first encountered the works of the author, Ian Creasey, and they impressed me enough to search for more of his stuff, hence this book. I cannot say that all stories are great, but there were no bad stories in this book, which came as a pleasant surprise.

Erosion a man plans to leave environmentally damaged Earth for a new colony elsewhere. He is seriously augmented, including a special skin. To say farewell to Earth, he goes outside, meets woman's chipped memories/AI installed on a bench, tests his new body. 3*
The Golden Record in the future museums and private collectors hunt for early human space program artifacts, including Voyager. The protagonist managed to get it, but now is sued by the relict United States of America in Exile, one of the former sovereign countries… 5*
The Hastillan Weed a protagonist works as a conservation volunteer, heading a group of newcomers in order to eradicate an alien plant that came with the alien Hastillans. This time the group is surprisingly large – maybe because for the first time a Hastillan is present to help. 4*
Reality 2.0 a flash-fiction about a new software WonderNumbers that ‘allows to divide by zero’ and other great :) breakthroughs 4*
The Edge of the Map a near-future world is covered more and more by surveillance cameras, and a journalist goes to the last ‘white place on the map’, which will be soon also covered with cameras. She is together with a guy, who thinks that people see much less weird stuff today (from elves to UFOs) because weird cannot be filmed, so in this last place all Earth weird should gather. 5*
This Is How It Feels a man has false memories about a daughter he never had. This is due to specially implanted memories of the girl, who died in a car accident because the man was several times caught speeding. 4*
Cut and Pastiche an artist works as a guide at an art gallery of the future: people upload themselves to get into the (computer-simulated) paintings of old masters. However, something goes wrong and they are stuck – maybe it is a sabotage attempt of ‘the New Movement’ of artists, who think that old art should be destroyed: "All artists are rivals, if only for attention. But the past is the worst rival of all. The Movement believes that in the face of constant change, people are looking backwards for culture as comfort-blanket. A lot more people decorate their homes with reproductions or pastiches than seek out the new, the cutting edge." 5*
Cut Loose the Bonds of Flesh and Bone a narrator’s mother is near death, but she paid a lot to be uploaded to remain in her house. The mom is heavily controlling and with a lot of microaggressions, so the daughter doesn’t happy that she would get back to the yoke… 3*
Proper Names a protagonist hired by a company that colonizes planets for a very special mission – naming everything on a new world before colonists arrive. His partner on the mission is a manager, who thinks it should be done quick-quick from a kind of cookie-cutter. 4*
Crimes, Follies, Misfortunes and Love a narrator lives in a post-apoc but now relatively safe future and she is a member of a club that tries to get more info about their ancestors from social networks archives, where the problem is that there is too much info. 4*
Demonstration Day a humorous piece about a trader, who specializes in selling gadgets to B-movie mad scientists. Each year they gather to show and boast their new toys, but this time one is missing. 4*
Successful Delegation an envoy from Earth in a protective bubble tries to make a deal with the inhabitants of a gas giant, who aren’t sure whether the world above (they cannot see beyond their atmosphere) exists and therefore whether the envoy exists or is it a prank. As the story progresses, not only aliens question his reality. 4*
The Adventures of Captain Contempt in Mixed Media Installations another piece about art and artists. A narrator is an art critic and he is to review a popular artist’s newest show. He sees that artist as a pompous nothing, with his only talent being in setting parties for journalists and sponsors. But I can see through this transparent nonsense. Other people would generate their own interpretations, seeing the glass of vodka as hidden alcoholism, or the shrinkwrap polythene as our throwaway society. In a show like this, anything can represent anything else. It's a luxury only allowed to artists. If my reviews were lists of random words in which the reader could find any meaning they liked, I'd be accused of laziness and piffle. 5*
In Profit and In Loss a short piece written as if corporations were people, who meet, marry, divorce, etc. 5*
The Scaffold an alt-history story, where a narrator works at the Conformance Bureau – a special institution helping a Christian church to set its dogma in line with science and he just told a journalist that according to the multiverse hypothesis everything that could happen happens, so holy people can go to hell… there are also pills that give a religious experience to every user for a short time. 3*
Rush Hours a flash fic about a physicist stuck in road traffic inventing teleports. 3*
The Prize Beyond Gold a protagonist is a 100-meter runner and it seems that this time he can break a world record, set 70 years ago. In this future, there are Standards (like him, also called the Ancestral Model) and the Enhanced – both gene and post-natal modified people, who are banned from competing at the Olympics. He has his whole life scripted for this chance of a new record. 4*
Afterword author’s notes about all stories in the book, how and who he wrote them this way.

You have subscribed to alerts for Ian Creasey.

You have been added to Ian Creasey's favorite list.

You can also sign-up to receive email notifications whenever Ian Creasey releases a new book.