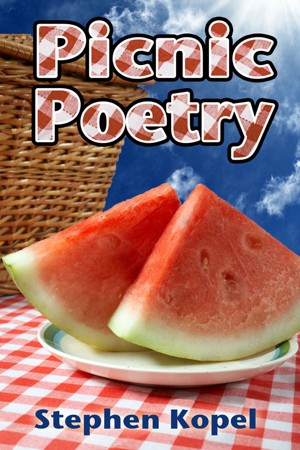 By Stephen Kopel
Rated 5.00/5 based on 1 reviews
This book offers a feast of funny bones, a plethora of pleasures pungent and tart, a basketful of extra helpings or side dishes to satisfy tummies hungry for delicious humor. No matter your mood, these tasty poems will alter your attitude.

Stephen Kopel is a teacher, cyclist, wordsmith and civic benefactor in San Francisco; he's the
creator of Word Painters public poetry events and
his new live show Poet With Props; his narrative,
lyric and Kopelian punnery genre pieces have been
part of academic reviews and independent journals
that number over three hundred around the English-
speaking world; has presented an AIS Radio show with Lighthouse For the Blind and staged poetry
events at the Randall Museum Theater; a member of
First Saturday Pocket Poets Salon hosted by poet
Nancy Wakeman; poet Kopel invests in the "I Take
Stock" market with assests divided between honesty, rationality, kindness and quiet courage

Quadruple and quintuple meanings and visions pop up with each re-reading. Jazzy diction and pointed punctuation shape each verbal/experiential bouquet.

One day I will sit down with Stephen and ask him what's really behind all the music.

(reviewed 4 months after purchase)
Ronald Lazar reviewed on Nov. 29, 2011
(no rating)
I have enjoyed poet Stephen Kopel's previous books of poetry, and find this one full of new linguistic acrobatics.  For those discovering his poems for the first time, I suggest that to expect "meaning" or "depth" from a poem by Kopel is a little bit like expecting meaning from an Olympic gymnastic routine.
It is what it is: a tremendously artful defiance of gravity.

"Picnic Poetry" is organized into "Starters," "Sides," and  "Extra Helpings."
Some poems have rhythm and rhyme, and I can easily picture children skipping rope to such daffy delights as in his poem, “National Pastime" :
"Mickey Mantis,
still as a stick
bent on preying,
wet as slicky spit,
a skinny sinner,
preaches a hungry shtick"

I like the way he constructs his images, line breaks and wordplay.  I find relief in his work; a welcome airy outing.

Kopel's whimsy is, yes, light in texture, but challenging in the breadth of his referencing a wider world of literature, history, culture and English peculiarities -all seems neatly packed, like a cubist memory box, that in its totality makes for some entertainingly original images.

Sometimes straightforward nonsense is, in the best sense, exactly the complimentary warp to the world's woof; and though the images and jokes may be playful, they are also sometimes wise and even at times touching on truth, weirdly familiar. Honestly, I read Kopel because he is as fun for me as he is engaging, as in “The Center for Derelict Satellites” :

“If the Milky Whey becomes genetically altered,
will the Kurds discard cheese altogether?

Meteors never shower if they think the universe is watching.

Does a comet scour and cleanse as it plunges, then, vanishes?
With nothing left to notch,
Van Allen Belts tighten buckles

You have subscribed to alerts for Stephen Kopel.

You have been added to Stephen Kopel's favorite list.

You can also sign-up to receive email notifications whenever Stephen Kopel releases a new book.