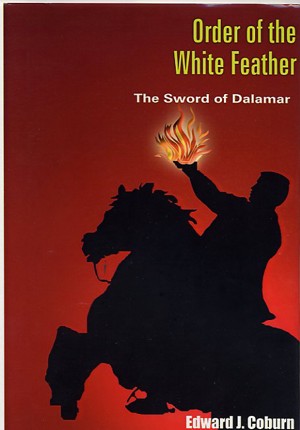 The Order of the White Feather: The Sword of Dalamar

Reviews of The Order of the White Feather: The Sword of Dalamar by Edward Coburn

This was a story like many fantasy stories with not much new, but the author was able to tell it with strong enough characters to keep the story interesting and keep me turning the pages long into the night. Although this story reached a logical conclusion, I can see easily how the characters could be woven into many other stories and I hope that Coburn chooses to write more. It would be a real shame if he doesn’t.

(review of free book)
John Armbruster reviewed on May 4, 2012

I love fantasy books but find that in so many of them the plot is transparent and the characters flat. Not true of this one. The plot is a bit transparent but it was fun anyway. The characters are well developed and multi-dimensional and the story was generally well written and hard to put down. I loved the Harry Potter books as everyone did, but I like the interesting way this author gave the characters powers rather than giving them a magic wand like Harry Potter. I know it’s not a completely unique approach, but I liked the way this author handled it. I must say I’m disappointed that there aren’t other fantasy books by him though I certainly hope there will be in the future. I will watch for them and read them whether they are follow-ons to this one or completely different story lines.

You have subscribed to Smashwords Alerts new release notifications for Edward Coburn.