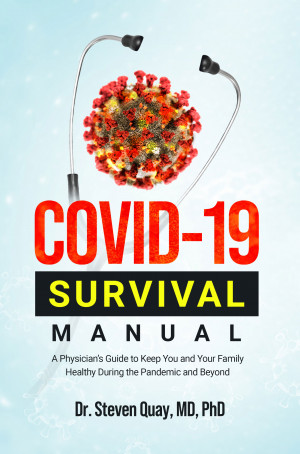 Covid-19 Survival Manual: A Physician's Guide to Keep You and Your Family Healthy During the Pandemic and Beyond

• One 2-minute step you can take every time you come home to kill Coronavirus before it enters your lungs
• A, quick, free home test for COVID-19 that is as good as the FDA-approved nasal swab
• The one exercise you won’t learn in the gym that can save your life
• How NOT to die of COVID-19 (Make your lungs younger)
• What to do if you have early stage COVID-19 so that you can stay out of the hospital
• The #1 most effective way to prevent the spread of coronavirus as we reopen society (Hint: it’s the one thing the CDC said was “NOT effective” when coronavirus hit the U.S.)
• Why a vaccine won’t be the solution, and what YOU can do to protect yourself, now and in the future
• What to eat and drink (and what to avoid) so you can prevent and beat this coronavirus
• The best supplements I have found from clinical trial research for immune health during this pandemic
• The coronavirus’ “Diabolic Trait” and how it helped the virus spread so fast
• An easy DIY step that takes your face mask from a viral barrier to a virus killer, giving you over 100-times the protection of an untreated mask
• The one blood test to ask for if you are hospitalized that can keep you off a ventilator
• Three steps to take to thrive during the next epidemic
• Learn about gain-of-function research and why we must ban it to prevent future pandemics

The proceeds from book sales will be shared with Team Rubicon, a non-profit organization that serves communities by mobilizing veterans to continue their service, leveraging their skills and experience to help people prepare, respond, and recover from disasters and humanitarian crises.

Dr. Quay received his M.D., M.A. and Ph.D. from The University of Michigan, was a postdoctoral fellow at MIT with Nobel Laureate H. Gobind Khorana, a resident at the Harvard-Massachusetts General Hospital, and was on the faculty of Stanford University School of Medicine for almost a decade. He has over 300 published contributions to medicine which have been cited over 9,700 times.

Dr. Quay has founded six pharmaceutical startups, invented seven FDA-approved medicines, and holds 87 U.S. patents. Over 80 million people have benefited from the drugs he has invented. His current passion is the prevention of the two million yearly breast cancer cases worldwide. A TEDx talk he delivered on breast cancer prevention, “How to Be Smart If You’re Dense,” has been viewed over 200,000 times.

Very informative and interesting book. Dr. Steven Quay is up-to-date on disease and cures. He does not assume or pretend as so many other "informed sources" of disease seem to do. It is obvious that he truly wants to help his reader with with life-saving advice –– which is so rare in our world today. Finally, if you look at his accomplishments and interests, he is more than qualified to advise our population on how to prepare to face and survive this pandemic. This book is a very wise investment.

Really strong book. Understandable, and puts events into context - the book gives both the virus itself and the response to the virus a framework. Lastly, very useful practical advice. Highly recommended.

You have subscribed to alerts for Steven Quay, MD, PhD.

Would you like to favorite Steven Quay, MD, PhD?

You have been added to Steven Quay, MD, PhD's favorite list.