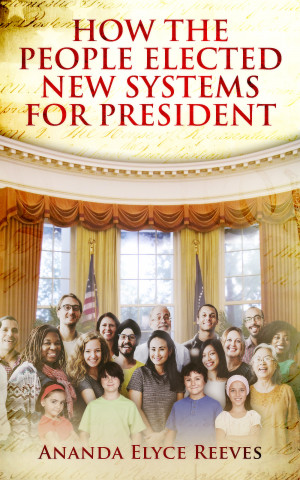 How the People Elected New Systems for President

By Ananda Reeves
The 2020 election votes for systems where the best Scientists, Environmentalists, and Educators will organize our country. No President needed. The people are real, the story is fictitious. Designed to spark the imagination, rattle people out of scarcity thinking, and visualize new possibilities. This story is about how it's done. More
This story is designed to spark the imagination, rattle people out of scarcity thinking, and visualize new possibilities. Little do people know, there is another choice for President of the United States in the 2020 election. His name is Steve Saylor who is a write-in candidate on his own ticket called the Money Free Party. This candidate is a real person, but the story about how he gets discovered and elected comes only from imagination. Everything starts with imagination. Women voters, ending slavery, civil rights, and technical advancements. Now the people need to imagine a world without money where everything is available to everyone. Imagine that money has no power and no value. A global Money Free System that starts at the 2020 election in America. Born out of desperate cries for help by people who believe there is scarcity. Against all odds... dare we dream of having new systems be our president. This is about the last President. It's a fictitious story about ordinary people that unleash their imagination, collaborate, and elect systems, not a President. Our future government is where the best scientists, educators, and environmentalists organize our country. Beyond a story…it's a call to action about how we can all literally thrive. This story is about how it’s done.
Available ebook formats: epub mobi pdf lrf pdb txt html
Price: $1.99 USD
Buy Add to Library Give as a Gift
How gifting works
Create Widget
Tags: people power systems theory future visions reality shift free resources money freedom election year alternative choices erase debt no president
About Ananda Reeves

My author name is Ananda Elyce Reeves. The name Ananda means Bliss and Joy. That is where I live. It’s not a town, but a state of Being. Elyce is the middle name my mother gave me. Reeves is my ancestry – My Grandfathers last name. Future (Ananda), Now (Elyce), Past (Reeves). I have way too much energy and imagination for this world. I radiate with bliss, joy, and imagination every hour of my life. The only thing I can do with this big energy is to gift these stories to people in hopes that everyone will find their own Bliss and Joy. Perhaps it’s the peoples’ imagination that will start the flame to change.
I was born a stillborn baby because my parents lived in an old military compound on top of a chemical heap. I survived birth, which explains a lot about my state of continuous happiness. I’ve been an agent for change since I was a little girl. I organized my Girl's Scout troop with a mission to make environmental changes in my neighborhood. The entire city got involved in the cleanup, and after that, no more stillborn babies were reported.
As a young woman, I started a women’s empowerment group, when the only kind of help a woman could find was if she was abused. That program is now in most colleges in the U.S; called the “Women’s Empowerment Course.” I attempted to start a “One Small Town,” modeled after Michael Tellinger’s design, but the people were not ready for the change. I moved next to the Venus Project in Florida to be of service to the project and to study Jacque Fresco.
I've been a life coach in the Law of Attraction for most of my adult life. Opened my own business school called the Ananda Academy where I trained entrepreneurs on how to manifest a business. I've lived in a variety of intentional communities all over the nation. I have four adult children and a granddaughter. I'm a vegan, on a spiritual path and enjoy gardening. I study Non Violent Communication, and Sociocracy. I'm a visionary who sees a bright future.

You have subscribed to Smashwords Alerts new release notifications for Ananda Reeves.

You have been added to Ananda Reeves's favorite list.

You can also sign-up to receive email notifications whenever Ananda Reeves releases a new book.