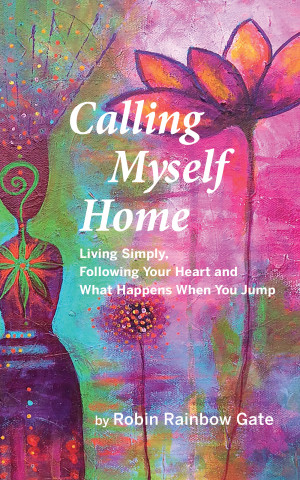 Calling Myself Home: Living Simply, Following Your Heart and What Happens When You Jump

Robin Rainbow Gate, born Lisa Sara Kaplan, spent the first 17 years of her life in Chicago. Born into a family of artists, Robin grew up with a studio in her house, and prospered from great cultural exposure and opportunity. For six summers, from age nine, she majored in art (and minored in harp) at National Music Camp, in Michigan, and refers to this time as her early college education.

The experience that had the most positive influence on her life (besides giving birth), was her experience in Alternative Education in High School. In the "Community" she learned about learning and thrived on being given responsibility for her own education. It is this experience that led Robin to believe the world is her classroom, and allows her to live by it. After one year at an alternative college in Washington State, where she studied "Science and Humanism" and the history and evolution of modern medicine, Robin lived abroad for five years. In England she received training as a Teacher of English as a Foreign Language, and got married. After two years, she moved to Bangalore, India, where she taught, lived, and gave birth. Three years later, she and her family "landed" in Lexington, Kentucky, where her then husband had a University position.

Along the way, Robin has been sole proprietor of "Underart" a small artwear business, cooked professionally (coolest job was as vegetarian middle-eastern and Indian Chef for the Princes of Dubai),and supported herself through various freelance creative projects.

In 1993, Robin left the suburbs and married life for a lifestyle more in accordance with her values. She founded the Voluntary Simplicity Support Group in 1995, which met for eight and a half years and still enjoys her simple lifestyle, based on her love for nature and care for Earth. Robin has been practicing plant medicine for years and enjoys harvesting and eating wild plants and making medicine with them. She is currently becoming acquainted with the medicinal plants that grow on the mountains where she lives.

In 2000, Robin was asked to interview a woman about her experience being a patient. Thus began her second documentary, “Like Rembrandt Draperies: A Portrait of Cathy Tingle”, used accross the nation in medical educational settings. The process of producing this film was a life changing experience which asked Robin to look at her feelings about my death, illness, and dying. That project inspired a business called LifeWorks, where she offered a healing opportunity and/or experience of being honored deeply through the way she listened to and invited their stories, ultimately creating edited tapes (video portraits) given as gifts to their selected loved ones.

From February 2006 through April 2007 Robin lived in a village in the South Central Highlands of Mexico where she spent much time learning from elder teachers and traditional healers about the spiritual knowledge and daily practice, as well as traditional healing methods of the ancient Mexicans (The Mexica) still in use today. After her first six months living in Mexico, Robin knew the simple village life was for her. Back in Kentucky, she sold her house, most of her things and within months returned to live amongst those mountains again. Robin's professional services incllude: Teacher of Authentic Indian Cuisine, Food Mentor, Health and Wellness Coach and Facilitator of Intentional Living courses and retreats.

As an artist, Robin finds her creativity, sensitivity and knowing delight in expressing themselves through writing, painting, teaching and marketing. Alll her work reflects and passionately honors listening inside and following one's heart and dreams as a way to live and make life choices.

Reviews of Calling Myself Home: Living Simply, Following Your Heart and What Happens When You Jump by Robin Rainbow Gate

You have subscribed to alerts for Robin Rainbow Gate.

You have been added to Robin Rainbow Gate's favorite list.

You can also sign-up to receive email notifications whenever Robin Rainbow Gate releases a new book.