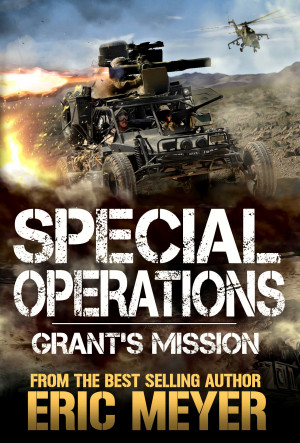 Yet swap is not possible. Even if they were willing, the prison guards have beaten Suslov to death inside his cell, and if Al Qaeda discover the killing, the deaths of the ten soldiers will quickly follow. A plan is hatched to cover the death by putting a substitute inside the prison cell, Ranger Captain Robert Cash. In the meantime, Intelligence discovers the prisoners are held across the border close to the capital of Tajikistan. Army Ranger Lieutenant Jack Grant works out a plan to cross the border illegally with his buddy Sean Kennedy and attempt to free them. Except things don’t work out, and on the way Al Qaeda and their Tajik Army pals throw everything they have at them.

With no alternative Grant and Kennedy fightback harder than they’ve ever fought in their lives. Their only way to reach the captured soldiers is to bring a war to Tajikistan. A war beyond their worst nightmares.

Eric is UK author of over fifteen books. He is a graduate of University College, Cardiff, where he studied politics. He served part-time in the Commandos, the Royal Marines Reserve, reaching the rank of Colour Sergeant. During his service he was seconded to take part in and lead a number of sensitive and classified missions, as well as undertake instructor assignments in a number of Special Forces schools. During this time he pursued a full-time career as an independent coach and consultant, working with various blue chip and smaller organisations. Eric Meyer has developed a specialty as a motivational coach, and drew heavily on his military experience to give his clients the tools for leadership, initiative and audacity that are the mark of the small unit commander.

Working with a number of authors and experts, he has been co-writer on a number of self-improvement and motivational titles. As an author, his books are sold all over the world in paperback, hardback and ebook format. He writes mainly in the genres of military thriller, and detective thriller. Indeed, his first novel, Devil's Guard, The Real Story, is a fact based novel based on the French IndoChina war in what is now known as Vietnam. With a number of novels set during World War II on the Eastern Front, as well as novels of the Vietnam War, his military experience is reflected in a range of war fiction titles. The detective thrillers are based on an NYPD detective, Gabriel de Sade, a Special Forces veteran.

He has also presented a number of documentary films, mostly exploring historical subjects ranging from early Christian history to the mystical brilliance of Leonardo da Vinci.

Eric is married with three children, and still pursues his military and historical research in his available spare time. He is also a keen runner, and has achieved success in a number of road and off-road races, including fell-running, the challenging sport of competitive running across hill ranges in the countryside. Throughout his career he has combined his extensive and growing knowledge of military affairs with his zest for the latest motivational tools to produce novels that will both thrill and entertain the reader. Current projects include research into the causes and progress of the war in Afghanistan. Currently, Eric Meyer is a full-time novelist.

About the Series: Special Operations

Special Operations is an action packed epic series which tells the story of tough, violent men fighting against a vicious and determined enemy in the Middle East. A harsh, hostile environment and an enemy who is no less harsh or hostile. A full-length novel by the bestselling author of many Spec Ops books. These include the popular SEAL Team Bravo stories, Heroes of Afghanistan, Raider, Echo Six, and Devil's Guard titles.

You have subscribed to alerts for Eric Meyer.

You have been added to Eric Meyer's favorite list.

You can also sign-up to receive email notifications whenever Eric Meyer releases a new book.