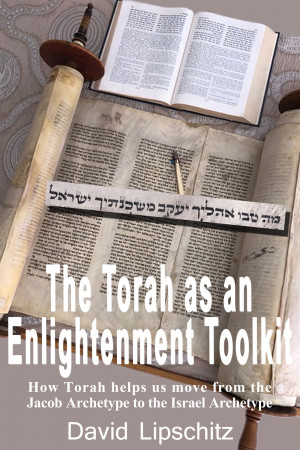 The Torah as an Enlightenment Toolkit

By David Lipschitz
Rated 5.00/5 based on 1 review
How Torah (The Old Testament or The Five Books of Moses) helps us move from the Jacob Archetype to the Israel Archetype. A commentary on Torah. More
From the Jewish Prayer book, we find the sentence (with transliterated Hebrew letters into English letters): "Va Ne-emar: Ki Fada Adonai Et Jacob, oo Ga-Alo MiYad ChaZak MiMeNu. Baruch Ata Adonai, Ga-Al Yisrael". Translated into English: "And it has been said: 'The Infinite delivered Jacob, and redeemed him from the hand of one stronger than himself.' Blessed is the Lord, the Redeemer of Israel."

From this single sentence, David Lipschitz created a hypothesis that we are all Jacobs striving to become Israels, as long as we can be redeemed "from the hand of one stronger than himself." Who or what is this "hand"? How does redemption happen? What messages is Torah giving us to help us on our journey towards enlightenment?

David says that we don’t jump to enlightenment in a single step, but we have glimpses of enlightenment and becoming enlightened is iterative as God gives us bigger and bigger challenges to overcome as we reach further and further into the darkness so that we can emerge higher and higher into the light. Eventually we are in a boat drifting on the waves, letting a hook down into the darkness to fetch something and then we enlighten that something as we bring it into the light (en-light-en it) and we can process our “stuff” faster and faster.

Balaam, a Moabite prophet, is hired by Balak to curse Israel, and instead Balaam says: “How goodly are your tents, O Jacob. They dwellings, O Israel.” (David has used this Torah passage in the cover of his book.)

Why this use of the words Jacob and Israel in the sentence?

Maybe Jacob and Israel are used like House and Home?

Individuals have individual tastes because of their values, upbringing and especially what they think is important. David's most important thing is that he is alive in 5 minutes, so everything he does is related to that. Cars, planes, holiday houses, watches, the latest smart phone, etc, pale into insignificance compared to what’s important in the next 5 minutes, and the 5 minutes after that, etc.

The words in David's life inform who he is. On a daily basis he works with Delphi, Oracle, Oracle Apex, Sage, The Human Energy Field, Relations. David in Hebrew adds up to 14. The word Hand in Hebrew is also 14, and a hand shows a way. David is a messenger, bringing messages that people often don't want to hear. Before David knew about numerology (Gematria) and Kabbalah (What God was doing before He created our Universe and The Secrets in the Torah), David lived at 1401 and now he lives at number 14. The 14th letter of the Hebrew Alphabet is Nun. The Nun has two forms, curled up and straight. Like a snake. And David's Chinese Birth Sign is Dragon and he is married to Mirjana, whose Chinese Birth Sign is Snake. And these two really get on well. A Straight Nun also represents a Staff and Moses had a Rod and a Staff. A Rod for measuring. A Staff for putting his Stake into the ground and saying "Here we are, and this is where we are going." 14 has another symbol 50. 50 as in 50%. But not 50% as in half way there, but 50% as in The Middle Path (a Buddhist Term), the path that balances two extremes and allows one to see and be in balance and be in heaven.

David's Vision is "No Cost of Living for ourselves or our planet".

David's Motto is "If you don't try you won't know".

David is an Oracle of Delphi, actually, an Oracle and Delphi programmer, specialising in relations especially in Accounting, Incentive & Loyalty, Textiles, Factory Management, Health, who became interested not just in how computers are programmed, but also in how humans are programmed. And in how humans can be unprogrammed or reprogrammed. Dogma gives us programs, which many of us follow blindly. Dogma gives us a starting point, but unfortunately for many people, it is their "way of life." How can we use our brains to overcome dogma and build our own dogma?

In 1998, David helped to found a Synagogue and in 1999, he cancelled his retirement policies and grew a dream of a new way of retiring. His efforts have led to two books, both about self-esteem.

Self-esteem is permanent, whereas motivation is fleeting. You can feel motivated today, but experience a setback tomorrow which undoes your motivation and sets you back months or maybe years.

David’s first book, "The Torah as an Enlightenment Toolkit" is about building personal self-esteem. It uses Ancient Wisdom from the Torah (Old Testament or Five Books of Moses) and a Torah message of Jacob becoming Israel to show how it is possible for humans to take advantage of our dark side and emerge it into the light, ie enlighten it. The Jacob archetype is symbolised by Egypt, the dark place. The Israel archetype is symbolised by Israel, the light. These archetypes are for men and women. This book uses the Ancient Wisdom of Torah for anyone of any religion and the book refers not only to Judaism, but also to Christianity, Islam, Buddhism, and other religions.

David's second book, "A User Manual for Life on Earth", is about building community or even world-wide self-esteem. David contends that our "modern world" has been in "lock down" for 500 years since "enclosure started" and it is now time for a new paradigm to commence or rather for it to become main stream and not just the domain of "preppers." Enclosure created monopolies and monopsonies. Enclosure made the playing fields uneven. Enclosure created barriers to entry so that those with money could get better rates and better perks than those without money. Enclosure created centralised systems.

But in the 2020s decentralisation is now mainstream. In many cases, it is already cheaper for communities to create their own electricity, water, sewerage, waste, waste to energy, solid waste, food, and other systems cheaper than they can buy it. Centralisation worked for 500 years, but it is failing.

In A User Manual For Life on Earth, David shows that 2020 gives us 2020 vision and in an age of plagues such as sicknesses and "quantitative easing" where we have the plague of too much money sloshing around in the hands of too few people, there is an alternative that is rising and which in fact has already risen and that the centrists and communists and "elite" are so scared of it that they are trying to shut it down.

But the cat is out of the bag, the hornet's nest has been opened, pandora's box is open, and many people are scared, but if these people can see past the fog and noise that has been created for them, they will see that an entirely new world is possible.

David's ultimate vision is to meet our galactic neighbours. In order to do this our minds need to be free. Our minds need to be free of the mundane things that we worry about. The mundane things that concern us are how will we pay for water and electricity and food and clothing and housing. But imagine that it was possible to live in a world where all these were free! In 2020! Some tell David that we won't have any challenge. Maybe so, but one already sees an explosion of creativity, an explosion of possibility and intuition has made a huge comeback in the 21st Century, and that leads us to the possibility of telepathy making an appearance, and then we will travel to our galactic neighbours, not with a ship or spaceship, but with that most powerful weapon in our arsenal, a razor sharp mind that cuts through fog and noise and sees what cannot be seen.

David’s third book, “Ramblings of an A-lien” shows us how we can become a-liens and meet the aliens. A lien is a debt. How do we get out of debt? This book is a playful rendition of David’s second book.

Reading Ma Tovu
David Lipschitz reading a sentence from Torah in Hebrew and English. "How beautiful are your tents O Jacob, your dwelling places O Israel". This sentence is from Numbers Chapter 24 vs 5. David book "The Torah as an Enlightenment Toolkit" is the result of this sentence.

Reviews of The Torah as an Enlightenment Toolkit by David Lipschitz

David is uniquely skilled at taking the age-old Torah and making it accessible to all. His up-front, candid skill at translating an essentially symbolic and anecdotal tome into something that is immediately usable and relevant to today’s fractured society is awe-inspiring. This excellent book by David is critical towards maintaining the relevance of the Old Testament's wisdom in today’s modern, crazed world -- something the world desperately needs. David, thus, expertly takes us backwards, in order to go forwards, skilfully connecting our spiritual history & direction with today’s fast-paced, modern world. All the answers are in the Torah. David gives these answers to the world in a language one can relate to and understand.

David’s acute skill in creating “The Torah as an Enlightenment Toolkit” enables society to re-ground itself in an age-old, perrenial, G_d-given wisdom. This, effectively and expertly, replaces today’s societal lack of moral understanding with guidance that is solid, clear and usable by anyone. His skill at delivering this unique expertise is firmly encapsulated in his hard-hitting, energetic and explanatory skills that do not offend. Rather, his up-front method immediately draws one in like a magnet to the unique, magical and critical messages offered by the Torah. David skilfully reinvents the Torah for the modern world at large -- a majestic feat!

You have subscribed to alerts for David Lipschitz.

You have been added to David Lipschitz's favorite list.

You can also sign-up to receive email notifications whenever David Lipschitz releases a new book.