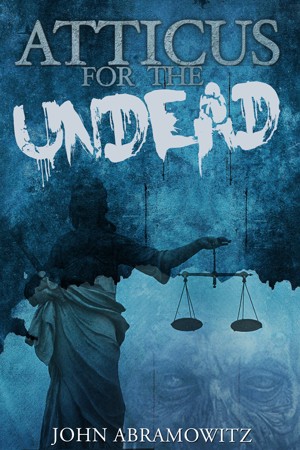 Atticus for the Undead

By John Abramowitz
Rated 4.00/5 based on 1 reviews
In the criminal justice system, magic users and the undead are represented by a special kind of lawyer: the arcane defense lawyer. These are their stories. More
The next chapter in the struggle for equal rights begins!

Hunter Gamble is an idealistic young attorney in a very special area of the practice: arcane defense. Funded by enigmatic billionaire Charles McClain and aided by shy-but-energetic research attorney Kirsten Harper, he's making the world a better place -- one vampire, zombie, or werewolf client at a time. After all, they deserve their day in court too, right?

When a young zombie walks into Hunter's office accused of murder (by brain-eating), Hunter's idealism is tested as never before as he struggles to secure the man's freedom. To do so, he must square off against a savvy and ambitious district attorney, contend with a judge who is deeply biased against arcanes, and stand up to a human-supremacist group which will stop at nothing -- not even Hunter's own death -- to see his client convicted.

John Abramowitz is a long, tall Texan (very, very tall) born and raised in Fort Worth, Texas. Educated at Grinnell College in the great state of Iowa, he considers Iowa his second home state, and keeps on good terms with both by eating both barbecue AND corn. When he's not watching way too much sci-fi/fantasy TV or reading similar books (or working, obviously), you can usually find him reading the news or playing video games. He currently resides in Austin, Texas, where he works as a lawyer and author.

In "Atticus for the Undead" John Abramowitz has created a world that sings of the past, of the present, and of an alternate future. The story takes place in Austin, Texas amid racial tensions, political wrangling, a murder trial, and an organization's bid to use all of these situations to push their own agenda.

Fifteen years prior to our story, an unexplained event unleashes a change upon the world. Creatures once only found in myth and folklore are once again unleashed, this time for real. How would you react if your neighbor suddenly gained magical powers? What if the kindly old lady down the street transformed once a month into a man-eating werewolf? These and other creatures, including vampires and zombies, are now a part of everyday life. These once normal citizens have joined a new racial class: The Arcane (or for the racially biased, the "Supernatural").

Enter stage right: Hunter Gamble. Hunter is a new type of lawyer with old fashion sensibilities. Following on his father's footsteps, Hunter became a lawyer. But where his father formed a huge law firm, Hunter followed his heart after reading "To Kill a Mockingbird". His entire focus is the rights of the Arcane. He is only human though, and his small law office does what it can.

Enter stage left: Sam Pollard. Sam is a young man whose only mistake was to die. Raised from the dead by his mage father, Sam becomes the focus for a legal battle that will affect the standing of the Arcane for many years to come.

The author describes the book as "Legal Fiction". I do not doubt that in many ways "Atticus for the Undead" falls in this category. However, I can think of several others that it would fit in as well. In truth, this is a cross-genre story that will appeal to many readers. There is drama, humor, action, magic, and of course, "Legal Fiction" as well.

Mr. Abramowitz has crafted a great story with very believable characters. Though the story is set in a slightly future time with mages, vampires, zombies and other Arcane, the situation is something you could see in any setting where racial tensions are high. This story serves as a reminder, a reminder that even when all are created equal, someone will always try to use fear to remove that equality and use the tension in their favor.

Every character is well developed. You can feel the tension as Hunter pushes through a crowd of angry Salvation Alliance members. The hatred and menace of Vorr against the Arcane is palpable in every scene he is in. Sam is a likable guy, a good son, and pitiable as a zombie. You will want everything to work out. You will cringe with each plot twist. You will smile as things go the characters way, and mourn when they don't.

"Atticus for the Undead" is in many ways and echo of "To Kill a Mockingbird", updated for our times and made more attainable to the masses. However, there are many differences and is actually in many ways a more believable (sans Arcane) story. This is especially true of the ending, which I felt came way too soon. I wanted more from, and for, each of the main characters of the story. However, looking back, I can understand Mr. Abramowitz's decisions. Rainbows do not lead to pots of gold, clouds do not have silver linings, and each and every one of use, Arcane and Natural, are all too human.

As Harper Lee's Scout told us in "To Kill a Mockingbird": "I think there's just one kind of folks. Folks." I think this important moral rings through every page of "Atticus to the Undead."

I am rating this book with 4 stars, but a very highly regarded 4 stars. While not the best book I have ever read, "Atticus for the Undead" was one of the most engaging. Whether you are a fan of legal, sci-fi, fantasy, or supernatural fiction I think there is something here for everyone.

You have subscribed to alerts for John Abramowitz.

You have been added to John Abramowitz's favorite list.

You can also sign-up to receive email notifications whenever John Abramowitz releases a new book.