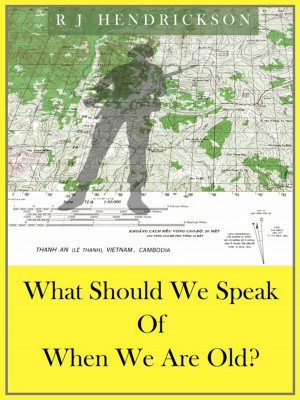 What Should We Speak Of When We Are Old?

By R. J. Hendrickson
Rated 4.00/5 based on 2 reviews
A Vietnam War story that uplifts. Think "Huckleberry Finn in Vietnam."

A young naive officer learns there is more at stake in the Vietnam War than getting a boost up in his Army career. The heroism of his Vietnamese and Montagnard friends shame him into becoming part of their desperate fight for freedom. More
Not the typical postmodern Vietnam War novel, this is an uplifting story about good and evil. Heroes are not always victorious, but they are always heroes.

Tigers and enemy soldiers stalk the dark mountainous jungle, hidden by cool mists, monsoon rains, and deep emerald canopy. Lt. Ben Spangler is a young, idealistic but naive Army lieutenant who seeks the Combat Infantryman Badge as his duty and a necessary step in his Army career. Denied the opportunity to serve with an American combat unit, he becomes part of a two-man American advisory team to Lieutenant Colonel Tran, a kind and brave Vietnamese district commander in the beautifully exotic Tuyen Duc Province.

Ben comes to know the sad desperation of his alcoholic boss, Major Swanson, and the quiet dignity of Col. Tran’s wife, who teaches him courage can be more than bravery in combat. He wins the trust of the brooding and mysterious Captain Thieu, a former university professor who speaks four languages, hates arrogant Americans, and is a dedicated killer of his country’s enemies.

R. J. Hendrickson is a former U.S. Army Infantry officer, Airborne Ranger and Jumpmaster, most notably in the 82nd Airborne Division. He volunteered for service in the Central Highlands of South Vietnam in 1971-1972 as an advisor to the Vietnamese Rangers. Living with the Vietnamese and Montagnard soldiers he learned of their tenacity as fighters and love for their freedom and country. Soon after leaving the Army, he met the girl of his dreams. They married and are living happily ever after. Their three married daughters have blessed them with seven grandchildren.

R. J. has worked over thirty years as a mechanical engineer in the mining industry, living in five states. He knows how it feels to be fired, as well as being successful. His philosophy is to be true to oneself and life will offer much in the way of excitement and adventure. His writing has been tempered by the hard knocks of life. He believes in realism, his Christian faith, love for his fellow man, honor, and writing that grabs you by the lapels and takes you to places you haven't been.

Reviews of What Should We Speak Of When We Are Old? by R. J. Hendrickson

Excellent first-person story that appears historically accurate though such isn't stated. Tells of a U S military advisor to the Vietnamese late in the war. The protagonist, a junior lieutenant, wriggles free of a desk job to be assigned as an advisor and liaison to Viet military posts during his single tour. He's sympathetic to his Vietnamese and Montagnard associates, and longs for a more active wartime role. He eventually obtains it and…

A really good read and the sort of book that Smashwords was set up to produce. You can sense that this story has been developing for a long time and Hendrickson's passion comes through.

You have subscribed to alerts for R. J. Hendrickson.

You have been added to R. J. Hendrickson's favorite list.

You can also sign-up to receive email notifications whenever R. J. Hendrickson releases a new book.