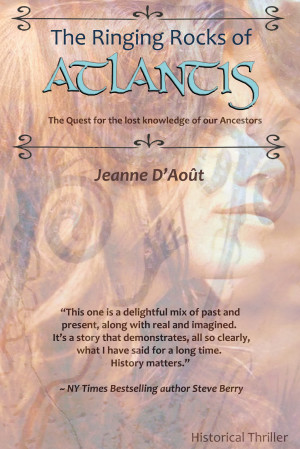 Reviews
"This one is a delightful mix of past and present, along with real and imagined. It's a story that demonstrates, all so clearly, what I have said for a long time. History matters." ~ New York Times Bestselling author Steve Berry

"A magnificent story - but even more than a story, for it contains a theory of world history that is both intriguing and enlightening. Jeanne D'Août is no less a thinker than a storyteller. Her tale has us winging through history and geography, and takes a lot of putting down once you start it. This third volume unfolds a new set of adventures around time travel, but has a serious message. As we swing between the ancient world and present-day Switzerland, an extraordinary myth comes to life. We and our past have the deepest reverberations and connections, and knowing the past can heal us." ~ Dr Colum Hayward, Polaire Publishing and author of 'The Once and Future John'

"Jeanne D'Août skillfully weaves a tasty tale of suspense and esoteric intrigue. Time travel - and its consequences, ancient Celts, Atlantis, and the legendary relic hunter Otto Rahn; it's all here, served up with a sumptuous measure of veiled historical truths. Some say truth may be stranger than fiction, but what if the so-called fiction is actually true? Fans of Dan Brown, and enthusiasts of historical mysteries, strap yourself in and enjoy the ride." ~ Andrew Gough, writer and television history and mystery show presenter

"It is a great tale - intriguing and provocative. It delves deep into human relationships, the history that underlies Western perspective and provides a way that technology will change our experience and our view of our existence. It is like going through a door into a hidden room where secrets are uncovered but where the real secrets are held in another room, beyond the first." ~ Greg Rigby, author of 'The God Secret' and 'On Earth as it is in Heaven'
Available ebook formats: epub mobi lrf pdb html
First 15% Sample: epub mobi (Kindle) lrf more Online Reader
pdb
Price: $3.99 USD
Buy Add to Library Give as a Gift
How gifting works
Create Widget
Tags: adventure mysticism atlantis ancient greece druids celts pythagoras thriller book otto rahn freemason symbolism
About Jeanne D'Août

Since 2007 a resident of the southern French department of the Aude-Pyrénées, a.k.a. Cathar Country, Jeanne D'Août is not only an author, but also a tour guide in southern France and tour organizer in Greece, and a passionate photographer and producer at PanOccitania Media. Since early childhood she enjoyed studying the lost history of civilization, the first centuries of Christianity, Gnosis and Mysticism. With her adventure novels, which were published worldwide in English, she has already drawn many people to beautiful Occitania, France, with its many mysteries, forgotten history and stunning Lord of the Ring-like landscapes.

In 2012 she was interviewed for a now world famous TV documentary called "Himmler and the Holy Grail", giving her a page on IMDb.

In 2019 she was involved as a guide for the successful History Channel documentary series 'Lost Relics of the Knights Templar' (her appearance is in episode four).

Jeanne has been a guest on many radio shows in Australia and the US, but also on a live TV Talk Show in Las Vegas in 2013. There are several interviews planned for 2020 and 2021, as well as a book tour and a retreat to Santorini, which will be based on her novel about the Atlantis myth. Her latest interview was published in the June 2020 issue of "The Big Thrill", the magazine of the International Thriller Writers Organization (ITW).

When, in the Summer of 2015, Jeanne became a member of the ITW (International Thriller Writers Organization), she followed the advice of New York Times bestselling author Steve Berry, to rename her first book: "White Lie" to "The Forbidden Relic". Its sequel, "The Eye of Ra", was published on Kindle eBook shortly after, in 2016. The third book of her Time Travel Trilogy is called "The Ringing Rocks of Atlantis", which was published in the Spring of 2020.

You have subscribed to alerts for Jeanne D&#039;Ao&ucirc;t.

You have been added to Jeanne D&#039;Ao&ucirc;t's favorite list.

You can also sign-up to receive email notifications whenever Jeanne D&#039;Ao&ucirc;t releases a new book.