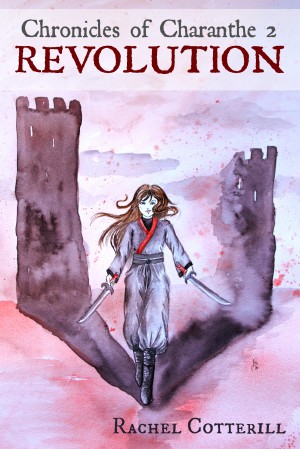 Rachel lives in the English Cotswolds. When she isn't writing, she likes to gather inspiration by seeking out life's little adventures: getting lost in as many countries as possible, collecting skills the way others collect stamps, and generally marvelling at the variety the world has to offer.

Also in Series: Chronicles of Charanthe

You've done it once again. I cannot wait for the next book in the series. Congratulations!

Rachel Cotterill’s second novel, Revolution, is another fast-paced adventure fantasy, and something of an accomplishment. A sequel to Rebellion, the book continues the exciting adventures of the interesting and remarkably independent hero Eleanor. The knife fights keep coming, the rousing action remains all pell-mell and helter-skelter, yet, astonishingly, Eleanor gives birth to two children in the course of the book. Even more surprising is the way Cotterill manages to keep Eleanor in the thick of things – and make it believable.

The political situation laid out in Rebellion is – as you might infer from the title - overturned in Revolution and the story heads off in a fresh direction. Martial arts share centre stage with the classic “ordinary people versus the oppressors” theme. As the book progresses, and Eleanor takes on a major leadership role, she comes across increasingly like a feminine Robin Hood. She even has her own Little John. A fellow revolutionary - by the name of Dash – upends her in a practice knife fight. As with good old Robin after Little John and his quarterstaff have knocked him into the drink, Eleanor takes it all in stride.

A weakness in the prior novel, Rebellion, was the relative lack of any emotional connection with the often sketchily outlined characters. In fact, Eleanor sometimes came across as an unsympathetic character. With Revolution, Cotterill improves her ability to engage the reader’s feelings. She is growing and developing as a novelist. We feel for Eleanor’s husband, Daniel, when Eleanor is unable to return his love. The terrible decisions Eleanor must make regarding the fate of her children are genuinely touching. By book’s end, we are not just curious, we care, about what happens next.

Younger readers may remain unaware, but for more mature readers the book sparkles with occasional glimpses into modern British and Western attitudes. We notice the anti-imperialism in remarks made by some characters. “These people have not asked to have our laws imposed upon them.” Then there is the cultural relativism seen when characters briefly debate the wisdom of one society imposing its values on another. These flashes of sophistication – social commentary - give the story depth.

The primary flaw in Cotterill’s fine second novel is her continued use of – I will get fancy here to make the point - inappropriate linguistic modernisms. People in societies – even imaginary ones - where beasts pull carts do not go “jogging.” They do not “recycle.” They do not talk about someone being “in denial” or a “drop-out.” They do not discuss warfare with First World War terms such as “front line.” These out of place terms needlessly jar the reader and risk spoiling the illusion of a society simpler than our own.

Revolution is such a strong novel it easily survives its minor blemishes. In Rebellion, the writing was sound. Here, it is also confident. The fast pace and sheer number of incidents ensures an engrossing and enjoyable read. I am looking forward to reading the next volume in this dynamic series.

You have subscribed to alerts for Rachel Cotterill.

You have been added to Rachel Cotterill's favorite list.

You can also sign-up to receive email notifications whenever Rachel Cotterill releases a new book.