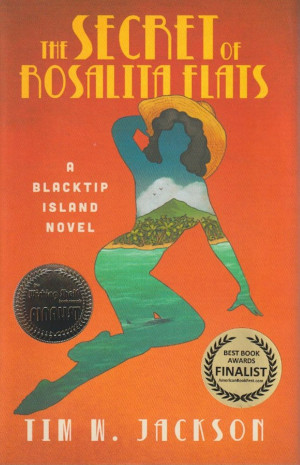 The Secret of Rosalita Flats

By Tim W. Jackson
Cal Batten wants to sell the football-shaped house he inherited on a backwater Caribbean island and pay off his creditors. Problem is, the will’s gone missing, the island’s rum-soaked ‘attorney’ has his own agenda, and Cal’s beautiful ex-best friend might drown him if she gets the chance. If Cal can’t figure out what his old man was mixed up in, fast, he may end up stuck on the crazy island. More
Cal’s a hapless watchmaker. Marina’s a beautiful scuba instructor. They were friends as kids. Now, not so much. Together they’ll solve the secret of Rosalita Flats. If the sharks don’t get them first.

The Secret of Rosalita Flats is the story of a man trying to unload the football-shaped house he inherited, while dodging the backwater Blacktip Island’s quirky collection of con artists, smugglers and other ne’er-do-wells: an ornery housekeeper who refuses to be fired, a rum-soaked attorney with his own agenda, a chair-wielding resort manager who thinks he’s an avenging angel, and a self-styled psychic who may be able to see the future. There’s also a mysterious someone—or something—trying to scare Cal off the island. Cal has to figure out what his old man was mixed up in, fast, if he’s to sell the house and get off the crazy little rock alive.

Tim W. Jackson’s first taste of scuba diving came at the age of six when he sneaked breaths off his dad’s double-hose regulator in the deep end of the pool. Later, as an ex-journalist armed with a newly-minted master’s degree in English, he discovered he was qualified to be a bartender, a waiter or a PhD student. Instead he chose Secret Option D: run off to the Cayman Islands to work as a scuba instructor and boat captain by day and write fiction at night. Two decades later, he still wishes that was half as interesting as it sounds. Or even a quarter . . .

Jackson is the award-winning author of the comic Caribbean novels Blacktip Island and The Secret of Rosalita Flats, as well as The Blacktip Times humor blog. His “Tales from Blacktip Island” short stories have been published in literary journals worldwide. He is currently concocting his next Blacktip Island novel and still enjoys scuba diving with his dad’s old double-hose reg.

A portion of the proceeds from his stories goes to the Nature Conservancy’s Coral Reef Preservation Fund.

Reviews of The Secret of Rosalita Flats by Tim W. Jackson

You have subscribed to alerts for Tim W. Jackson.

You have been added to Tim W. Jackson's favorite list.

You can also sign-up to receive email notifications whenever Tim W. Jackson releases a new book.