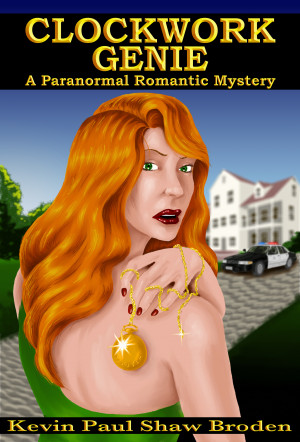 By Kevin Paul Shaw Broden
Cecilia Orchard discovers that she is the suspect in the murder of a grandfather she never knew she had. On top of that craziness Cecilia has inherited a powerful genie. What are her dreams and is she willing to make the wish? And can she uncover who really killed her grandfather? Find out in this paranormal romantic mystery that is part of the CLOCKWORK GENIE MYSTERIES. More
Cecilia Orchard lives alone.

She writes fantasy and mystery stories to escape a humdrum data entry job that barely pays for her apartment, food, and bus fare. Then a handsome police detective arrives with news that she is the prime suspect in the murder of her grandfather whom she never knew existed. If inheriting a fortune from a man she doesn't know isn't madness enough, Cecilia finds herself the owner of a powerful genie that could make all her dreams come true, but what are her dreams and is she willing to make the wish? And can she uncover who really killed her grandfather? Find out in this paranormal romantic mystery that is part of the CLOCKWORK GENIE MYSTERIES.
Available ebook formats: epub mobi pdf lrf pdb txt html
First 20% Sample: epub mobi (Kindle) lrf more Online Reader
pdb
Price: $2.99 USD
Buy Add to Library Give as a Gift
How gifting works
Create Widget
Tags: romance paranormal romance fantasy magic detective genie paranormal mystery fantasy mystery clockwork genie mystery fantasy
About Kevin Paul Shaw Broden

Seeking a career in comic books, Kevin Paul Shaw Broden took art courses throughout his education - only to eventually discover that no matter what the media, he was a storyteller at heart.
Kevin has been telling stories ever since. His first published story was a science fiction tale that appeared in his college newspaper. Since then he has written for television animation, including the Japanese series MIDNIGHT HORROR SCHOOL. Kevin is a member of the Animation Writers Caucus of the Writers Guild of America, west, and a supporter of Women in Animation.
He also wrote a well-received chapter story online called REVENGE OF THE MASKED GHOST, which has since been collected online with accompanying illustrations as REVENGE OF THE MASKED GHOST: 5TH ANNIVERSARY EDITION, along with a follow-up short story called "A Tale of The Scarlet Spirit: In The Clutches of Convicts". He hopes to do even more with these characters in the future.
CLOCKWORK GENIE is Kevin’s first full-length novel, a paranormal romantic mystery originally debuting in late 2011 and re-released in a new edition in 2018, including new cover art. The CLOCKWORK GENIE MYSTERIES also includes a follow up short story called, "The Cop That Wouldn't Die: A Clockwork Genie Story".
Additionally, Kevin's released short stories include the individually available titles "Murder on the Cosplay Express" and "No Easy Way to Die".
For over the last fifteen years, Kevin has been illustrating and co-writing the online comic book FLYING GLORY AND THE HOUNDS OF GLORY which can be found at http://www.flying-glory.com The premise is: the granddaughter of the World War Two super heroine Flying Glory, Debra Clay discovers she has inherited super powers and convince her high school friends to become heroes to help promote their rock band.

About the Series: Clockwork Genie Mysteries

You have subscribed to alerts for Kevin Paul Shaw Broden.

Would you like to favorite Kevin Paul Shaw Broden?

You have been added to Kevin Paul Shaw Broden's favorite list.