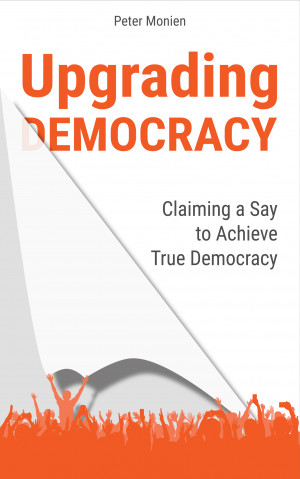 By Peter Monien
Why continue to write politicians a “blank political check” for successive four-year terms when this practice patently does not serve the people it pretends to represent? This book describes a realistic and actionable plan to solve the representation crisis and create a people's champion in parliament. More
Writing politicians a “blank political check” continues to fail the constituents who elected those same politicians to power: no representational accountability; no effective way for citizens to be heard after the polling booths close. What is the solution?

...Upgrading Democracy outlines why we as individuals and as society need to claim a greater say as part of the political process in order to achieve a fairer and more representative democracy.

The root problem is that politics in a democratic republic doesn‘t represent the will of the People. According to RepresentUS, only 4% of Americans have a “…great deal of confidence in congress.” We clearly have a Representation Crisis: in truth, most people don’t even know which politician or party they can trust to represent them or their best interests.

This book proposes a practical solution to end this frustration and claim a seat at the table hosting the wider democratic process in order to have a real say. To achieve this new political paradigm, this book puts forward challenging questions in need of urgent answers:

- What is a feasible way to achieve this democratic change in the current political system?
- How to persuade or circumvent established political parties who are resistant to foundational change?
- Why does systemic change demand a new kind of decentralized political party and not merely the substitution of individual candidates?
- How can this new kind of grassroots democratic party be organized to work effectively?
- How should the internal processes be safeguarded to enable best decision-making practices?

The answers lie in the idea of the proxy party solution presented in this book—an idea that would enable voters to do much more than put pressure on politicians and the political system, giving the People democratic autonomy with a view to ensuring individual voices are heard. Such a party would be a genuine conduit of the voices of the People, allowing its members to have a direct say in parliament.

In other words, this solution is the cornerstone for a truly representative, democratic process. “Upgrading Democracy” describes a realistic and actionable plan for voters who are disenfranchised with incumbent political parties, and are prepared to take action to effect change.

“Upgrading Democracy is an inspired reimagining of what the democratic process could be if we reorganise representation along truly decentralised, democratic lines. Peter’s work represents a practical, actionable way forward to achieve this most desperately needed of outcomes across every echelon of the disconnected global political scene.”
-Rich James, co-founder Decentr

German version of the book which listed German specifics instead of US specifics:

Peter Monien is a ‘political refugee’ from Germany who lives in Switzerland. He has become increasingly disenchanted with what politicians are deciding in the name of the people and are doing with public funds, mostly unknown to the electorates they pretend to represent. After the 2007 financial crisis (and the subsequent lack of accountability at every economic and political level), he has lost faith in mainstream politics.

Peter’s attempts to understand what led to these catastrophic outcomes, which are evidently not in the best interests of the average citizen, drove him to become a systems thinker in order to better understand the complex interrelated and interdependent parts of our political systems, with a view to effecting urgent change.

In August 2018, Peter decided to step forward and develop a new, truly democratic counterproposal to the current entrenched political system.

This journey led him over the political precipice and into the abyss of current political systems, arriving at an analysis of their weaknesses in order to propose a range of possible solutions that play to the strengths of true democracy.
The results of his research and proposal for a new kind of grassroots democratic political party, the ‘Proxy Party,’ can be found in his books Upgrading Democracy and Achieving True Democracy.

Peter’s broad background in banking, economics, business administration, including market development and sales, gives him a unique insight into business and communications systems. As systems thinker and co-founder and former board member of the largest German freelancer cooperative, Peter is uniquely equipped to formulate and deploy actionable ideas that positively impact large-scale organizations, institutions and processes. Since 2014, he has been looking into how decentralized systems can be applied to achieve these goals for a fairer and more egalitarian society.

You have subscribed to Smashwords Alerts new release notifications for Peter Monien.

You have been added to Peter Monien's favorite list.

You can also sign-up to receive email notifications whenever Peter Monien releases a new book.