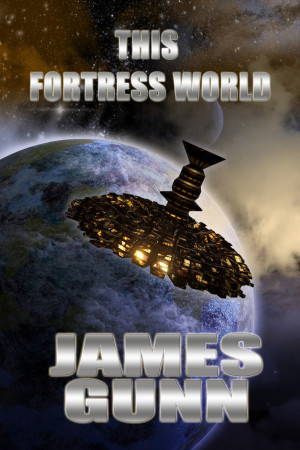 By James Gunn
In the distant crumbled future in our galaxy, powerful people want the secrets of the past. More
SFWA Grand Master James Gunn's _This Fortress World_ takes place in the far future of our galaxy, when countless civilizations have risen and fallen, leaving only their marvelous scientific achievements as legacy to those worlds which have now fallen into a new Dark Age. On the planet Brancusi, William Dane, an acolyte monk in the all-powerful Church, comes into possession of a crystal pebble dropped in the offering plate, a stolen treasure believed to hold untold secrets of mankind's past. There are powerful men who will stop at nothing, including murder, to recover this ancient artifact. Ignorant of the outside world, who can Dane find to help, and who should be trusted with the pebble's secrets?

James Gunn is the author of more than thirty books, including the Hugo Award-winning nonfiction work Isaac Asimov: The Foundations of Science Fiction and the novel The Immortals, on which the television series The Immortal was based. Other novels include The Listeners, The Joy Makers, and Kampus. He also has collaborated with other authors, most notably with Jack Williamson on Star Bridge. He was named a Grand Master by the Science Fiction and Fantasy Writers of America in 2007.

You have subscribed to alerts for James Gunn.

You have been added to James Gunn's favorite list.

You can also sign-up to receive email notifications whenever James Gunn releases a new book.