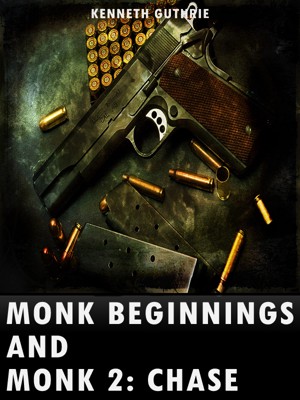 By Kenneth Guthrie
Monk is fighting a war. The Chinese military hurt him and those he cares about. Now, he is going to return the hurt a hundredfold. (Story One) Monk faces serious danger as he searches for the torturer who broke his faith. Still, he won't be stopped, not with his goal so close. (Story Two) Monk is trapped in a web of death. An intelligence agent must die, but first Monk has to find him. More
1. Introduction
These two stories are from my Monk Political Thriller Series. If you like these stories, you may enjoy my Spy Action Series, which is similar in theme and action.

3. Description (Monk #1)
1 year has passed since the execution of an entire village in the hills of Tibet. Now, the only survivor, Monk, a Buddhist priest caught in the vicious acts that were carried out there, is out to get revenge on the Chinese who devastated the village in front of his eyes. This story is about revenge and faith in a world that is and never was fair. “Fearfully violent, yet with a strong presence.”

4. Description (Monk #2)
Bo is dead. The old man is gone. Monk is on a roll, until he meets the scarred man that is. A brutal brawl is on the books for Monk as he fights to find the man who ordered the event that destroyed his faith, while avoiding being killed at every turn. Monk is tough and resourceful, but can he overcome this? Political action at its best!

Kenneth Guthrie lives in the US and writes on a variety of topics from crime, westerns, thrillers, horror and more.