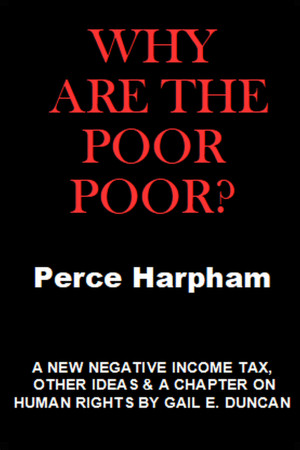 Why Are The Poor poor? - A New Negative Income Tax & Other Ideas.

By Perce Harpham
Thomas Piketty's book "Capital in the 21st Century" in 2014 was a compelling account of how wealth inexorably increases inequality. It was a best seller and is now made easily digestible by a film of the same name.
This book shows why the Poor remain poor and proposes some solutions. E.G. a detailed Covid 19 "sketch plan" for a fiscally neutral restructure of the Income Tax & Benefit Systems. More
This book is for Politicians, Social Scientists, Economists, the Wealthy, the Middle Class, Workers, Activists, Students & the Disadvantaged. As well as those who care about people and the planet. Something like the Benefit and Income Tax changes suggested here are urgently needed because of the Covid19 pandemic. They give new meaning to "Negative Income Tax".
Various solutions to inequality have been promulgated. Some have been advocated for many decades and are now gaining greater traction. Many of these ideas have had extensive coverage at a philosophical level but almost nothing has been published about the practical difficulties of the detailed design, costs, funding, political acceptability and transition from the present systems. This book explores some of the systems used by the New Zealand and other Governments which contribute to the continued rise in inequality and attempts to provide a "sketch plan" of some of the work that is required to make the dreams come true.
Available ebook formats: epub mobi pdf lrf pdb html
First 21% Sample: epub mobi (Kindle) lrf more Online Reader
pdb
Price: $2.99 USD
Buy Add to Library Give as a Gift
How gifting works
Create Widget
Tags: democracy justice transformation human rights inequality basic income social benefit income taxes transitioning negative income tax
About Perce Harpham

Born in 1932 in New Zealand Perce graduated with degrees in Chemical Engineering and Mathematics (M.Sc)then worked for a subsidiary of Imperial Chemical Industries (ICI) ( Dulux New Zealand Ltd) for 14 years. He was moved to the United Kingdom and then Australia as Operations Research Officer. He returned to New Zealand to progress through Production Manager at Lower Hutt for Dulux Paints Ltd and then Management Services Manager responsible for the fourth computer to be installed in New Zealand. He had made his first contact with computers in 1957 while in the UK.

Perce started the first computer software company (Progeni) in NZ in 1968. Progeni prospered and Perce setup subsidiaries in Australia, the USA and China. Following the financial crash of 1987 Progeni, in 1989, was "collateral damage" in the failure of the Bank of New Zealand. See
https://perce.harpham.nz/The story of Progeni.pdf

Perce started again with some success, qualified as a Mediator & Arbitrator and devoted more time to his family and grandchildren, sailing and other pursuits. These include an interest in politics and acting as an arbitrator and mediator. He enjoys cruising in yachts.

Perce's wife, Myra, also once had a high public profile as co-director of New Zealand's Commission for the Future. They have been married for 64 years. They have 3 children, 8 grandchildren and 1 great grandson.

Reviews of Why Are The Poor poor? - A New Negative Income Tax & Other Ideas. by Perce Harpham

You have subscribed to alerts for Perce Harpham.

You have been added to Perce Harpham's favorite list.

You can also sign-up to receive email notifications whenever Perce Harpham releases a new book.