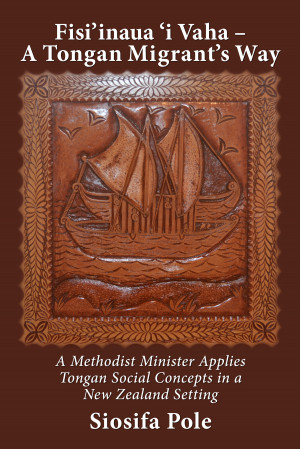 The book’s title, Fisi’inaua ‘i vaha, refers to the spray of sea water from the big waves that crashed on the double-hulled canoes in which his ancestors navigated the ocean to find new lands of opportunities.

This book includes significant conference papers Siosifa presented on issues such as child abuse and youth suicide, land, and displacement. There is also a helpful glossary of Tongan social and cultural concepts.

“This book reflects my journey of ministry in the Methodist Church of New Zealand over the last seventeen years. This journey was like sailing on double-hulled canoes in the vast Pacific Ocean. During this period, I practised my ministry in various contexts, in which I encountered diverse social issues, that my family, members of parishes I served, and communities that I was part of, confronted. My experiences prompted me to write articles for our Parish bulletin when I was in the Dunedin Methodist Parish, and papers that I presented in Conferences as one of the voices taking part in talanoa (story telling) in the theological landscape, as well as in the church. Mine is not the only voice, but one of many voices from the vaha.

My hope in writing this book is to empower both lay people and ordained ministers in the Methodist Church of New Zealand and beyond, to develop their own concepts, from their cultural and theological contexts, that will assist them in their reading and interpretation of Biblical texts.” From the Introduction

Praise for Fisi’inaua ‘i Vaha – A Tongan Migrant’s Way:

“In this challenging collection of essays we hear the voice of a modern Tongan religious leader exploring with us, his readers, what it is to inhabit two island worlds… Always speaking from a close sense of gathered family connections and gifted with an undiminished delight in the natural world around him, he proudly brings the words and images of his Tongan background into a conversation that has been developing for many years among Christian communities in this much-colonized land.” From the Preface by Emeritus Professor Colin Gibson.

Rev Siosifa Pole was born in the Kingdom of Tonga and brought up in the villages of Lapaha and Fua’amotu.
His parents were Kalafitoni and Neomai Kakala Nai Pole.
He was educated in Tonga and worked for the Tongan government before coming to New Zealand in 1986, for theological study at the Bible College of New Zealand, where he graduated with a Diploma in Ministry in 1989. Siosifa also holds a Diploma in Ministry from the Australian College of Theology, and a Bachelor of Theology and a Master of Theology from Melbourne College of Divinity. He trained for presbyterial ministry at Trinity Methodist Theological College in Auckland, with a focus on pastoral care and leading worship in English language settings.
In 2002 Siosifa was stationed to Wesley Roskill Methodist Parish, in Auckland. He was ordained in 2003 and served the parish for nine years. His second appointment was to Dunedin Methodist Parish where he served for seven and half years.
During his time in Dunedin, he started to write theological reflections from Tongan perspective to widen the understanding of this mainly palagi parish. Siosifa now serves as the Acting Director for Pasifika Ministries in the Mission Resourcing section of the Methodist Church of New Zealand.
The content of this book reflects Rev Pole’s journey of ministry in the Methodist of Church of New Zealand, and also his desire to share his experiences as a Tongan migrant who is practicing ministry in Aotearoa New Zealand.
He is married to Naomi and they have four children.

You have subscribed to alerts for Sisofa Pole.

You have been added to Sisofa Pole's favorite list.

You can also sign-up to receive email notifications whenever Sisofa Pole releases a new book.