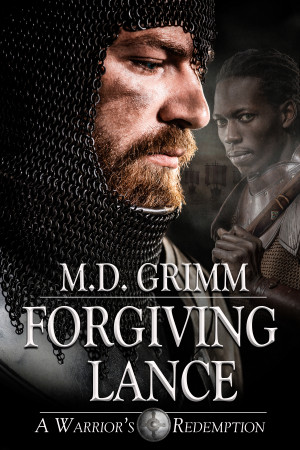 A trial of pain.

Lance's mission is to cut down Ulfr's warriors. Gust plans to help him do so, despite the royal soldiers hunting them. However, when word of a new Scourge reaches them, their journey brings them to the war-ravaged kingdom of Grekenus. It is there that Lance is forced to face the actions of his past. More
A tragic secret.

A trial of pain.

Gust holds a secret close to his heart, and it festers like an infected wound. While part of him wants to tell Lance so they can deal with it together, he fears what it will do to his friend. The last thing he wants to do is hurt the man he is falling in love with. And it never seems the right time as they pursue Ulfr’s warriors and elude hunting parties of royal soldiers.

Lance wants nothing more than to confess his love and undying loyalty to Gust. But he fears rejection. He has Gust’s friendship and dares not ask for more. He’s not yet a man worthy to ask for more. And as he continues on his self-imposed mission to cut down Ulfr’s warriors, he begins to wonder if he will ever find the redemption he so fiercely seeks.

When word of a new Scourge reaches them, their journey brings them to the war-ravaged kingdom of Grekenus. It is there that Lance is forced to face the actions of his past, and once again his life hangs in the balance. Now it is only Gust who can defend him against those thirsty for blood… and to Lance himself.
Available ebook formats: epub mobi pdf lrf pdb txt html
First 20% Sample: epub mobi (Kindle) lrf more Online Reader
pdb
Price: $4.99 USD
Buy Add to Library Give as a Gift
How gifting works
Create Widget
Tags: romance adventure magic mm romance swords and sorcery
About M.D. Grimm

M.D. Grimm has wanted to write stories since second grade (kind of young to make life decisions, but whatever) and nothing has changed since then (well, plenty of things actually, but not that!). Thankfully, she has indulgent parents who let her dream, but also made sure she understood she’d need a steady job to pay the bills (they never let her forget it!). After graduating from the University of Oregon and majoring in English, (let’s be honest: useless degree, what else was she going to do with it?) she started on her writing career and couldn’t be happier. Working by day and writing by night (or any spare time she can carve out), she enjoys embarking on romantic quests and daring adventures (living vicariously, you could say) and creating characters that always triumph against the villain, (or else what’s the point?) finding their soul mate in the process.

About the Series: A Warrior's Redemption

What does it truly mean to be redeemed?

Lance, formerly known as Scourge, hopes to answer that question. His journey will take him all over the Nifdem Empire, and along the way he will meet friends and foes alike. With him travels his best friend and great love, Gust, a talented and compassionate healer, and his loyal stallion, Brutus. The three of them will unknowingly set into motion a chain of events that will change their homeland forever. They must trust in themselves and in each other if they hope to make it out alive.

Also in Series: A Warrior's Redemption

Reviews of Forgiving Lance (A Warrior's Redemption 2) by M.D. Grimm

I really liked Lance in this book and Gust grew on me more.

In this one the political intrigue is ramped up with all the players being moved around the board by the puppet master. A character that I really don't like (shocking considering he is the bad guy but the guy just annoys me). I feel for Lance because no matter what he does he is being used or the want to use him is there. He was been made a weapon as a child and now everyone wants to control him. He's never had the chance to decide for himself what he wants to do. I'd like to see him create his own destiny and do what he wants but that's not how its going to go.

I liked that the secret is now out in the open and I actually liked how that came about. I think it was a great move having Lance face some of his victims and hear their tales. The surprise guest here was very welcome and nice touch.

You have subscribed to Smashwords Alerts new release notifications for M.D. Grimm.

You have been added to M.D. Grimm's favorite list.

You can also sign-up to receive email notifications whenever M.D. Grimm releases a new book.