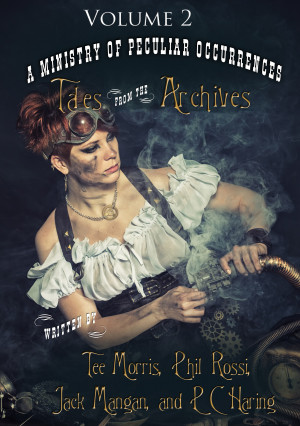 Tales from the Archives: Volume 2

Darkest before Darkwater by Tee Morris- A group of survivors from the airship Guy Fawkes find themselves washed ashore on an uncharted island. In their search for survival they uncover one mystery after another.

The Shadows of Calcutta by Phil Rossi- Agent Robert Smith, on return from a mission in Nepal, is diverted to India where he is charged to find a missing agent. Alex Tanner had been investigating a series of thefts and murders holding the Ministry’s attention, and now it falls on Agent Smith to find his missing comrade.

Night's Plutonian Shore by Jack Mangan- In 1849 when a poet is murdered in the streets of Baltimore. The man behind the seemingly random murder manages to elude the law until — in 1889 — Agents Bruce Campbell and Brandon Hill track him down. The assassin, Mikael Scharnusser, gives the slip to the agents on revealing his “talent” and the madman’s intentions to bring down the House of Usher.

The Seven by P C Haring- Agent Brandon Hill is on assignment in South America, enjoying the local culture and women, when a mystery that could lead to El Dorado falls into his lap. Before the intrepid agent knows it, he is the jungle uncovering a plot but the devilish Illuminati. He will need all his monkey knife fighting skills to survive this one.
Available ebook formats: epub mobi pdf lrf pdb txt html
First 20% Sample: mobi (Kindle) lrf pdb Online Reader
Price: $2.99 USD
Buy Add to Library Give as a Gift
How gifting works
Create Widget
Tags: adventure mystery supernatural south america victorian steampunk india phil rossi ministry of peculiar occurrences jack mangan p c haring
About Tee Morris

Tee Morris began his writing career with his 2002 historical epic fantasy, MOREVI The Chronicles of Rafe & Askana. In 2005 Tee took MOREVI into the then-unknown podosphere, making his novel the first book podcast in its entirety. That experience led to the founding of Podiobooks.com and collaborating with Evo Terra and Chuck Tomasi on Podcasting for Dummies and its follow-up, Expert Podcasting Practices for Dummies. He won acclaim and accolades for his cross-genre fantasy-detective Billibub Baddings Mysteries, the podcast of The Case of the Singing Sword winning him the 2008 Parsec Award for Best Audio Drama. Along with those titles, Tee has written articles and short stories for BenBella Books’s Farscape Forever: Sex, Drugs, and Killer Muppets, the podcast anthology VOICES: New Media Fiction, BenBella Books’ So Say We All: Collected Thoughts and Opinions of Battlestar Galactica, and Dragon Moon Press’ Podthology: The Pod Complex.

When he is not writing, Tee enjoys life in Virginia alongside Philippa Ballantine, his daughter, and five cats (3 female, 2 males). Considering the male-to-female ratio in his house, Tee understands how General Custer felt near his end.

You have subscribed to alerts for Tee Morris.

You have been added to Tee Morris's favorite list.

You can also sign-up to receive email notifications whenever Tee Morris releases a new book.