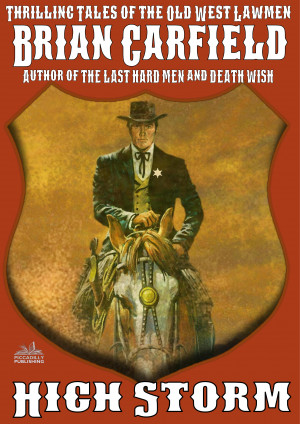 The author of more than seventy books, Brian Garfield is one of USA's most prolific writes of thrillers, westerns and other genre fiction. Raised in Arizona, Garfield found success at an early age, publishing his first novel when he was only eighteen. Which, at the time, made him one of the youngest writers of Western novels in print.

A former ranch-hand, he is a student of Western and South-western history, an expert on guns, and a sports car enthusiast. After time in the Army, a few years touring with a jazz band, and a Master's Degree from the University of Arizona, he settled into writing full time.

Garfield is a past president of the Mystery Writers of America and the Western Writers of America, and the only author to have held both offices. Nineteen of his novels have been made into films, including Death Wish (1972), The Last Hard Men (1976) and Hopscotch (1975), for which he wrote the screenplay.

To date, his novels have sold over twenty million copies worldwide. He and his wife live in California.

About the Series: The Lawbringers

Although Brian Garfield is better known for novels such as DEATH WISH, he wrote many Westerns. The Lawbringers series brings together his original stand alone novels written under different pseudonyms and explores the Old West from the eyes of the lawmen - these were the Lawbringers.

Also in Series: The Lawbringers

You have subscribed to alerts for Brian Garfield.

You have been added to Brian Garfield's favorite list.

You can also sign-up to receive email notifications whenever Brian Garfield releases a new book.