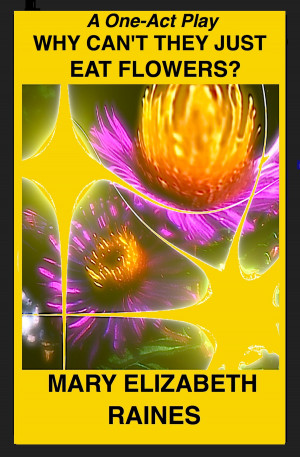 By Mary Elizabeth Raines
In this short (30-min.) one-act comedy, Myrtle and Rose are two fairies who dislike human beings. They temporarily take human form, with surprising consequences. There are three scenes. Cast for either 2 women, or 1 woman and 1 man, this play was originally written for h.s. play competitions, and went to state level. With minimal cast and sets, it is ideal for h.s., church or small theater groups.

MARY ELIZABETH (LEACH) RAINES writes novels and plays, as well as books about hypnosis. She has won national, state and local awards for her writing. Her writing ranges from inspiring literary fiction about serious life themes, as in her novel, UNA, to contemporary (THE SECRET OF EATING RASPBERRIES) to whimsical and satirical (THE MAN IN THE GPS AND OTHER STORIES).

She was one of the 2015 top prize winners in the coveted Writer's Digest competition in the category of literary/mainstream story, and was also a prize-winner in 2016 for nonfiction. She has won other awards in the past for her writing. Ms. Raines' lengthy publishing history began when she sold children's stories to magazines in the early 1970s. She has been a newspaper reporter and a freelance editor, and is currently a columnist for "The Journal of Hypnotism." She teaches writing classes for adult education in Sedona, Arizona, where she resides.

Her formal education was in piano performance at the New England Conservatory of Music in Boston, Massachusetts, and she also spent several years in independent film studies at the University of Wisconsin in Oshkosh. She still plays the piano, writes plays and film scripts, and has a long history of acting and directing. Ms. Raines is also an internationally recognized hypnotist and the director of the Academy for Professional Hypnosis Training.

She is happy to be a distant cousin of Louisa May Alcott.

You have subscribed to alerts for Mary Elizabeth Raines.

You have been added to Mary Elizabeth Raines's favorite list.

You can also sign-up to receive email notifications whenever Mary Elizabeth Raines releases a new book.