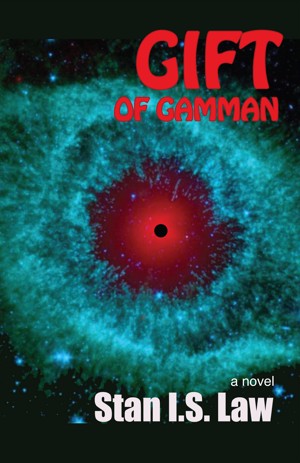 This book has everything. Love, suspense, mystery, surprise, danger, enigmatic aliens, explanation of ancient myths, and much, much more… You will laugh and you will cry, but most of all, you will be amazed. Perhaps, flabbergasted! It will stretch your imagination to outer limits, and beyond.

Stan I.S. Law (Stanislaw Kapuscinski), architect, sculptor and prolific writer was educated in Poland and England. While there, he also played concert violin, and studied opera at the Guildhall School of Music.

Since 1965 he has resided in Canada. His special interests cover a broad spectrum of arts, sciences and philosophy. His fiction and non-fiction attest to his particular passion for the scope and the development of human potential. He authored more than thirty books, eighteen of them novels.
Under his real name he published seven non-fiction books sharing his vision of reality. His non-fiction books can be found at:

As an architect [RIBA, MRAIC, OAQ ret.] he designed a number high rise buildings in Montreal, including Regency Hyatt Hotel (now Delta), Place Mercantile, Headquarters for the Mutual Alliance, as well as a number of low and middle rise structures for private clients. In the National Capital he was the associate in charge of design of Royal Bank Headquarters on Sparks Street.

Review by: Joan Adamak on June 1, 2015 Stars:
This is one of the best sci-fi novels I have read because there is the possibility that Earth could face the events that occur in this novel; thus the story seems more than fantasy.
In order to understand the novel, it is necessary to read the prologue, although because it was the first portion of the story, it didn’t really register in my mind. But as it progresses, an astronaut, John Galt, has been traveling alone in a space ship for over 200 years in a state of suspension except when he regained consciousness enough to make changes in the ship’s controls. Although he is actually over 200 years old, he looks about forty because the body is dormant and does not age while in suspension. When he is called back to Earth, he meets with Commander Hermes D Grant, whom he had met sixty years prior and since Grant is confined to the time of Earth, he is aged and not expected to live long.
Grant explains to Galt that the populace of Earth has abused it for years through pollution, over-population, and destructive chemicals. The Earth can only last eighty years more. Most of the population does nothing but sleep, and the Federation Council gets nothing accomplished because they don’t know how to do anything but yell at each other. Grant asks Galt to go as far as he can in space and determine if there is another planet that can take Earth’s population when they can no longer be sustained here. Galt agrees and is given the first spaceship of its kind that has been built while he was away. It is huge, can take 47 people and automatically adjusts its controls when necessary. Galt is also introduced to a woman, name Delta, who will act as his aid; she is beautiful, extremely intelligent, trained to the max and seems able to read his mind.
The story is the search they make as they approach various planets in our corner of space, being chased by pirates, going to maximum warp of ten g’s, and entering outer space where no Earthling has ever been. The attraction between Delta and John has a surprising twist. The reality of the story is while John and Delta are directing the spaceship the reader feels like he is there, living the moments. At the same time, the author, as usual, throws in some philosophy, spirituality, and human weaknesses and strengths with the mystique that enhances the story.
I recommend this novel story to even those readers who don’t enjoy genres of this type, for it is so much more than just sci fi.

Given time, I’m sure Stan Law will take us beyond our wildest dreams. Now that I mention it, he just did, right here; and all this thanks to the inexplicable, exhilarating, enchanting Gift of Gamman.

Imagine, crossing the galaxy at 96% of the velocity of light, meeting ‘people’ thousands of years more advanced than we are, and then benefiting from their knowledge.

You’ve got to read it to believe it. And then close your eyes and… just dream.

I like the idea of going to sleep, and then waking up on a different planet. Or is it a different reality? With Stan Law you can never be sure. But it’s worth finding out.
Although, now that I think about it, I might prefer to stay behind. Just imagine, all this real estate and no one to disturb my peace of mind. The book is mindboggling!

A warning: this book is NOT for people of limited intelligence. It makes you think!

I gave up after around 200 pages or so. The characters are wooden at best, and the plot, such as it is, slips into poorly defined spiritualism at best. I expected something very different.

Gift of Gamman is a thought-provoking science fiction thriller but it doesn’t end there. This story encompasses many genres as an original and gripping read.

It is important in this story to read the prologue. If this is something you normally skip you would be remiss to do that with this story. Adam Blake awakes after nearly 50 years of deep slumber to find he has arrived at his destination. On a one way mission to collect data for the United Planets Federation of a peculiar black hole the ship would collect the necessary data while Adam would add to it human observation and insight. Only once Adam arrives he finds that what he expected to happen - what should be happening - is not happening. What happens next is a fascinating exploration into a reality where energy is manipulated but our consciousness remains. Adam is able to transverse time and space in an epic journey that could only be brought to us by Stan I.S. Law.

Author Stan I.S. Law has outdone himself with Gift of Gamman. This story not only engages science fiction but spirituality, love, adventure, history and hope. As Adam chooses to return to earth and inhabit the body of John Galt he experiences even further awakenings. He is exposed to an alien race that is enigmatic and intriguing. John-Adam finds enlightenment in the esoteric.

The story has incredible characters, scenery and dialogue. The humor and seriousness flow together beautifully. The underlying possibilities fill us with wonder and intrigue. The ending is beautiful and hopeful. I highly recommend it!

»Gift of Gamman« is a great science fiction novel with wide range of different themes that make the book very dynamic and interesting to read – it has everything from science fiction to adventure, mystery, spirituality, suspense and a lot more – so everything what you expect from any good fantasy story. The author creates a future world and presents it to us in such a way that it really enables you to fly there. And that is only a beginning…

The story has interesting plot, great characters, dynamic happenings, surprises and overall, it is well written, entertaining, exciting and most important - it really draws you into it and takes you to a new world! I would highly recommend it to all fans of science fiction novels.

I like the idea of going to sleep, and then waking up on a different planet. Or is it a different reality? With Stan Law you can never be sure. But it’s worth finding out.

Although, now that I think about it, I might prefer to stay behind. Just imagine, all this real estate and no one to disturb my peace of mind.

Just kidding. I love the Gift of Gamman.

While I am not your regular Sci-Fi reader, I’d swap places with Delta anytime.

(Who is Delta? I will not give the secrets away, but if we could retreat to the Garden of Eden and start the human race again, I’d vote for Delta replacing Eve. Or… or we could do it the way Gamman proposes; either way, it would be better than the present—or the predictable future.)

Read it and find out for yourself.

A fantastic book. The farther we are apart, the closer evolution brings us together, both, through time and space. Lemuria, Atlantis, the science of the ancients, it all comes alive, real, inseparable part of our reality. And then the glorious, inexplicable tomorrow.

This is a masterpiece!

A ‘living’, or ‘participatory’, immortality is a vastly preferred option to sitting on a cloud and being bored to ‘death’ for and ever and ever. Although Stan Law does not propose the ultimate paradise, he certainly takes a giant step towards it.

He also makes an important psychological point for our religious and political critics. Not all that seems bad is bad. It may have hidden portends of a bright future. Well done, Mr. L, or is it K?

You have subscribed to alerts for Stan I.S. Law.

You have been added to Stan I.S. Law's favorite list.

You can also sign-up to receive email notifications whenever Stan I.S. Law releases a new book.