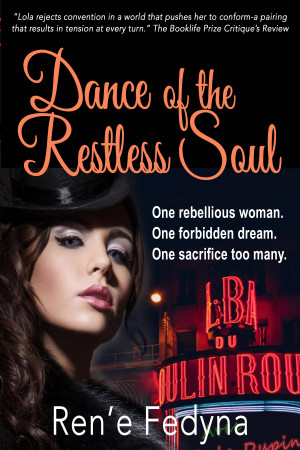 Dance of the Restless Soul

By Rene Fedyna
A 19th century romantic historical adventure where the rebellious daughter of a rich aristocrat enters the gritty Paris underworld to become a famous cabarét star.
A romantic historical adventure that takes place in late 19th century Paris, where Lola La Fontaine, the rebellious daughter of a rich aristocrat, risks her life when she defies her father to become a famous cabaret star. More
One rebellious woman-One forbidden dream-One sacrifice too many

Her dream becomes a nightmare. In pursuit of the cabaret life, Lola La Fontaine finds herself thrust into the gritty Paris underworld of kidnappers and killers.

At sixteen, Lola La Fontaine lives an elegant and sophisticated lifestyle in La Belle Epoque Paris, but will soon be forced to marry one of the richest men in France—a man she doesn’t love.

Knowing he will forbid her to pursue her dream to be an entertainer, she has no choice but to escape, but escape to where?

Her passion is enflamed when she meets Charlie Sloane. Handsome, charismatic and debonair. Lola finds him irresistible, but his deceptive ways plunge her into a life of intrigue and violence.

My love for historical fiction began as a teenager when I read Les Misérables. The morality, the settings, the richness of the characters and their struggles enthralled me. I found myself hooked on stories about Paris and read the classics by Jules Verne, George Sands, Émile Zola, Colette and many other fabulous authors. I knew one day I would write historical fiction about the interesting characters I would come to know.

I was born on the Lower East Side of Manhattan in New York City. A colorful neighborhood teeming with life. Where wash hung on clotheslines outside the overcrowded tenements and vendors hawked their wares as they pushed carts carrying everything from fruits and vegetables to clothes and shoes (new and used).

The people in my neighborhood were of all nationalities and religions, including Orthodox Jews, Italians, Russians, Slovaks, African Americans and Puerto Ricans. Many popular performers had grown up in the area, including the Marx Brothers, Al Jolson, George and Ira Gershwin, and Irving Berlin. These famous entertainers had moved on long before I was born. However, their spirit was alive in the people who remained. When my mother sent me on errands, the shop owners often entertained me. The shoemaker was a comedian, the tailor’s wife sang opera, our landlord once did a tap dance when my father paid the rent, and my grandfather was an amazing storyteller. These were only some of the great personalities I enjoyed in my youth. These people had never been on a stage but would probably have become famous if they had the opportunity and the good fortune.

Later, drawn by inexpensive housing and cheap food, The Lower East Side became “hip” as the Beat poets and radical artists infused the neighborhood that had come to be known as The East Village.

This early introduction of life’s variety set my imagination on fire. I knew one day I would write stories about the personalities I had been so affected by. But it didn’t happen right away.

When it was time to move on, my love of history and a fascination for colors and textures would help me decide that becoming an Interior Designer would be the perfect fit. I studied Interior Design at UCLA and then became a self-employed Interior Designer. Once again, I realized how important it was to use stirring descriptions to help my clients realize how their empty spaces could be transformed into their dream look.

Now that I am retired, I have the opportunity to fulfill my dream as an author of historical fiction novels. My novel, “Dance of the Restless Soul,” is the first of four novels in the “Dance” series. But I have so many stories that I would love to share with you in my future novels.

Reviews of Dance of the Restless Soul by Rene Fedyna

You have subscribed to Smashwords Alerts new release notifications for Rene Fedyna.

You have been added to Rene Fedyna's favorite list.

You can also sign-up to receive email notifications whenever Rene Fedyna releases a new book.