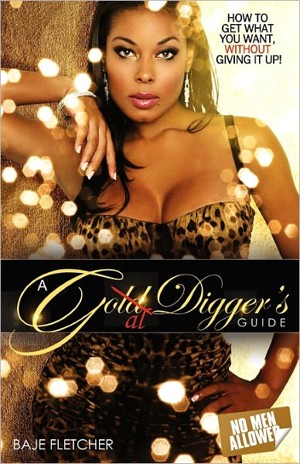 Receiving a great deal of publicity for her new book, A Golddigger’s Guide, successful CEO and author Baje Fletcher schools aspiring women on how to play the game to get what they want.
On the rough road to Hollywood, countless beauties searching for fame and fortune become overwhelmed by the seedy advances of self-proclaimed “powerful men” who promise to make them a household name. Such men include sleazy executives, producers, entertainers, sports stars and even corporate professionals who prey on unsuspecting, beautiful women naïvely ready to “do anything for fame.”
When these men get to star model and author Baje Fletcher however, the game gets flipped on them and she’s taking no prisoners in the process. Having been there and done that, or at the very least, observed the effects such “poor choices” have had on other women, Baje is turning the tables and making a profit She wants to teach you how she does it as well.
The multi-faceted Baje is in the process of shopping her reality show based off A Golddigger’s Guide and is preparing to write her second book. She credits her tireless work ethic to being “Brooklyn-born and Jamaican-raised,” as her upbringing taught her the value of perseverance, hard work and being resilient through challenges. "If everything I have today is taken away from me, I know how to pick myself up and start all over again because I came from nothing." Baje concludes, "Everything I have now is a blessing. I’m a hard worker and thank God I’m able to do what I love for a living."

Her book's called A Gold Digger's Guide. She teaches "apprentices" how to get gifts from men without falling in love. The author, actress ("Paris Hilton's My New BFF"), music video dancer (most recently, Kanye's "Love Lockdown"), and entrepreneur aims to teach "how to get what you want, without giving it up." You know: it. "You don't ever tell him up front that you're not going to sleep with him and never meet alone or in secluded areas," Fletcher says. "It's about using your mind and planning ahead."
Fletcher's house, Bentley, college degree, and collection of Gucci and Louis Vuitton purses have been financed by the great men of Miami, Broward, and Palm Beach. Fletcher called South Florida home in 2007 and 2008, and she stopped by our newsroom last week. After the jump, her favorite local places to pick up sugar daddies:

Cugini Grille & Martini Bar
"In Delray, the men are mature, focused, and goal-oriented. I can learn things from them, like business etiquette. There are always Bentleys and Rolls-Royces around Cugini, and there's nice jazz music playing down the block."

The Westin Diplomat Resort & Spa
"It's a hotel that has a couple of lounges attached where yachts sail right up to you -- literally, you can step right off a yacht and step right in the party, which is often outside."

I'm Baje Fletcher (Beige like the color). Some would say I got my drive from the islands and my hustle from New York. I was born in Brooklyn in 84, but was raised in Jamaica. I got back to the states when I was 14. We never had much growing up, Brooklyn was rough and in Jamaica everyone had to contribute to make ends meet. I lived most of my adult life in the Florida. I’m the last child of ten (six boys and four girls). My father is still living, my mother passed away when I was 19- breast cancer. I have two sisters who were also affected by the disease. Because their illness hit so close to home, I’m open to donating to, or walking for the breast cancer society and willing to volunteer my time to those still in the fight.

I’ve been the entertainment industry since I was 18 (at first mostly modeling, then acting). There wasn’t much work in Orlando (Mickey Mouse town is what residents call it) so I commuted to Miami…a lot. I was 18 when I received my first invite to a fashion show, when I attended I was scouted by the head talent co-coordinator. She liked my look and welcomed me to be a part of her troop. She wasn’t paying a cent but I recognized the opportunity to network and so I took her up on the offer. At each of her shows I made it my duty to network with 3 people (whether they were photographers, model agents or other models). From then on it snow boarded, I began going on castings with other models and shooting with photographers to build my portfolio. Over my career span I’ve done print, fashion shows, award shows, commercials, movies, TV shows, reality shows and over 30 music videos. The first major one was Trick Daddy and Twister (Let’s Go). A friend of mine heard about it on the radio and drove me to the set. When we got there he pushed me to the front, and before you know it I blended in like I belonged there. Once again I wasn’t getting paid but I recognized the opportunity to network. There were so many people on set so I didn’t even see myself in the final cut of the video. However, I networked. I met an agent that booked me on paid videos from that day on.
Being in the industry exposed me to a side of life that most never get to see. Invites to red carpet events, mansion parties, swingers parties, best seats at the games, free alcohol, easy access to drugs, and the chance to mingle with CEOs, millionaires and celebrities on a regular basis… some of whom I now call friends. As women, it’s natural for us to me drawn to the glitz and glamour; it’s not uncommon that we want to be pampered, wine and dined, go on shopping sprees, travel the world and part take in the most exclusive events. If you’re in the right place, at the right time it is possible, but often comes with a cost: SEX. It’s easy to fall into that trap. I’ve seen many beautiful and talented women come to Miami and Los Angeles with high hopes of becoming successful or getting matched up with a successful mate but way too often they get caught up in the hype, in sex, drugs and excessive alcohol. Soon they lose sight of their GOALs and themselves. Before you know it, most casting directors, producers and power players in the industry have had their way with them.

Over the years I’ve perfected the skill of getting what I want, without having to use my body to get it. It isn’t always easy because as soon as a guy gives you the “hook up” on anything he’s expecting to cash-in. I had some help along the way from people like me. People who noticed my persistence, my drive to succeed; they recognized my hustle because they were hustlers themselves. I felt compelled to help other women also, so I bundled what I learned, shared short cuts I discovered and shared my experiences in a handy, dandy book that maps out how women can get ahead financially without falling into the sex trap. Frankly, I’m tired of ultimatums, and if I am, I know that other women are too. I’m tired of hearing phrases like: “We can do business together but it has to be pleasure also”, “I’d help you with that, but you’re going to have to take care of me”,

I know too many women who gave themselves to guys way too early, only to find out that all the promises he made to her was just “game”…and of course after the lies cleared it was too late for her to get that part of her that she gave away. I heard too many stories of women dedicating their lives to men who really don’t care about them, their GOALs or their dreams, and women who put the needs of guys they barely know ahead of their own. I could have named my book a thousand other titles other than: A Gold Diggers Guide, but let’s overlook the taboo title for a moment and hear my message. Have a screening process: Believe you deserve the best and don’t settle. When you first meet a man, he’ll put his best foot forward, so just know that you’re meeting his representative, not him; so in the mean time, Don’t be too quick to open up: (your home, your heart or your legs). Never lose sight of your GOALs: Before a man comes in the picture work on you. Know who you are, what you want, what you deserve and set GOALs. When a man does come along, Remember that you are number one: You have needs so don’t be afraid to express them. If he truly cares about you then it wouldn’t be a problem for him to help you out (especially financially). Let him work for you: let him prove himself to you (that usually only happens in time). Learn from your mistakes: If you caught one that wasn’t willing to contribute, work and wait then he doesn’t deserve you anyway; So, Don’t be a slave to your conscience: throw that one back in.

Let’s just put it this way: If we live in a world where it’s use or be used…I’m not going to be the one getting used.

You have subscribed to Smashwords Alerts new release notifications for Glitz and Glamour Publishing.

Would you like to favorite Glitz and Glamour Publishing?

You have been added to Glitz and Glamour Publishing's favorite list.

You can also sign-up to receive email notifications whenever Glitz and Glamour Publishing releases a new book.