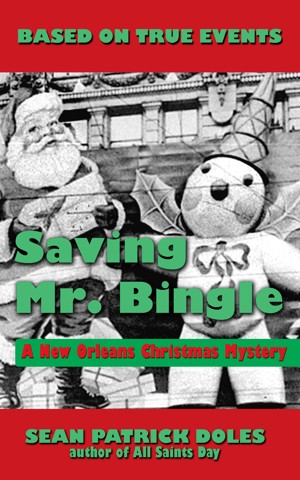 By Sean Patrick Doles
Few works of fiction have the power to change the real world, but Saving Mr. Bingle is one of them. More
Christmas has been a difficult time of year for department store manager Haywood Coleman since the death of his only son, but this year promises to be the worst. A corporate takeover jeopardizes the existence of his store and, along with it, the fate of Mr. Bingle, New Orleans’ beloved Christmas mascot.

But a mysterious turn of events propels Coleman into a fight to save the little snow fairy despite it costing him his job, his reputation, and nearly his marriage.

When all seems lost, Coleman teams with a young reporter, Hope Lawson, and they learn the heart-breaking truth about Oscar Eisenberg, the original puppeteer and voice behind Mr. Bingle. Their discoveries fuel a campaign that rallies the entire city. Through his struggle to save Mr. Bingle, Coleman honors Oscar Eisenberg’s memory and makes peace with his own painful loss.

Inspired by true events, Saving Mr. Bingle is a magical story of redemption and faith that will make you laugh, make you cry, and make you appreciate the very miracle of life.

The real Mr. Bingle came to life in 1948, when Emile Alline, a window decorator for Maison Blanche Department Store, recruited Edwin H. “Oscar” Isentrout to animate the puppet Alline had created. At the time, Isentrout had been working in a Bourbon Street burlesque club.

Isentrout performed four Mr. Bingle shows a day during the holiday season at his puppet theater in the Canal Street store. Mr. Bingle soon became a fixture on local television, appearing in commercials for Maison Blanche and in his own daily show, which ran from Thanksgiving to Christmas. Isentrout also brought his traveling show to other store locations as well as to hospitals, schools, orphanages, and anywhere else that could use a little holiday cheer.

A native of Brooklyn, New York, Isentrout worked with several touring puppet shows in New York and Canada before buying a bus ticket to New Orleans on a whim in 1947.

Isentrout never married, and he died in 1985 at the age of 61 after a long illness. With little money to his name and no family, Isentrout was buried in an unmarked grave in Hebrew’s Rest #3 Cemetery.

Mr. Bingle, however, lives on to this day, thanks to Dillard’s Inc., which purchased Maison Blanche in 1998, and continues to celebrate this unique New Orleans tradition every holiday season.

In 2005, after the initial printing of Saving Mr. Bingle, proceeds from the sale of the book went to the Oscar Isentrout Memorial Fund, which purchased a tombstone for Isentrout’s unmarked grave. As a result, the memorial is now in place in Hebrew’s Rest #3 Cemetery in the Gentilly neighborhood of New Orleans.

A portion of proceeds from additional sales of Saving Mr. Bingle are helping preserve the popular Mr. Bingle display in City Park of New Orleans’ Celebration in the Oaks.

Sean Patrick Doles was born and raised in New Orleans, Louisiana. After his early education at Immaculate Heart of Mary School, he attended Jesuit High School and earned a National Merit Scholarship to the University of Southern California, where he received degrees in Journalism and History.

While at USC, he was an editor of the student newspaper, The Daily Trojan, and a walk-on member of the varsity tennis team.

During college, he interned at New Orleans Weekly Gambit newspaper, which was located in the Maison Blanche Building on Canal Street at that time. At Gambit, Sean researched the “Blake Pontchartrain” historical and cultural trivia columns, beginning his ongoing fascination with the secret history of New Orleans.

After college, Sean wrote for several Los Angeles-based music magazines before returning home to found the ill-fated Way Y’at N’awlins bar & club directory with his brother Jimmy. (This paper has no relation to the current Where Y’at magazine, which has since prospered.) During this same period, Sean also worked at Gambit, resurrecting his role as Blake Pontchartrain. You may recall his brilliant discourse on the history of Chee-Weez or on magical elixir-like qualities of Regal Beer. And let’s not forget the six months Sean spent working as an emcee at the world-famous Cat’s Meow Karaoke Bar on Bourbon Street in the French Quarter.

Chasing his heart (and a woman) to Texas, Sean landed briefly in San Antonio where he worked for Sports Magazine Publishing, writing and editing several local and regional publications, before settling in Austin. He spent a few years working for an Austin-based Populist political pundit, running the business while his boss ran his mouth. Now he plies his trade handling marketing and communications for the YMCA.

Despite living 500 miles away from his hometown, Sean’s desire to write little historically based stories about New Orleans has never waned, and he has several new tales completed and ready for publication.

You have subscribed to alerts for Sean Patrick Doles.

You have been added to Sean Patrick Doles's favorite list.

You can also sign-up to receive email notifications whenever Sean Patrick Doles releases a new book.