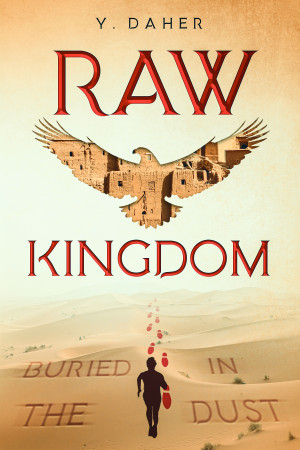 By Y. Daher
Curiosity killed the cat. But is also brought a buried secret back. More
Khadir's first overseas trip hasn't gone to the best of starts. And if wasn't for some quick thinking it surely would've been his last. Yet just when he thought he saw the worst of his home country, a dark fragment of its history makes a resurgence.

Y.Daher was born in Toronto, Canada to Djiboutian parents. Daher had many passions growing up, but one passion that remained strong throughout the years was that of reading. Daher would read anything that was readable,from small pamphlets to subway ads. His desire of reading was only matched by his vivid imagination. Daher was often regarded by his teachers as a avid daydreamer, but they couldn't have known that he wasn't just staring at the ceiling, but was brewing the many stories he planned to write. The first among them, Raw Kingdom: Prelude is available in Paperback and E-book.

You have subscribed to alerts for Y. Daher.

You have been added to Y. Daher's favorite list.

You can also sign-up to receive email notifications whenever Y. Daher releases a new book.