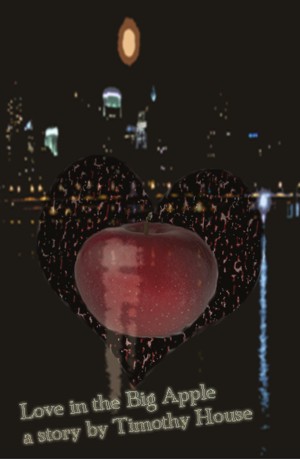 Love in the Big Apple

By Timothy House
Adam meets the girl of his dreams in Paris. They have a romantic adventure through the city and before they both fly back to the US she disappears leaving Adam devastated. Five years later she appears again in front of a cafe in SoHo. He is faced with a choice to go talk to her again and maybe be with her again or walk away.
Available ebook formats: epub mobi pdf rtf lrf pdb txt html
First 30% Sample: epub mobi (Kindle) lrf more Online Reader
pdb
Price: $0.99 USD
Buy Add to Library Give as a Gift
How gifting works
Create Widget
Tags: romance drama love story new york city new york story the big apple
About Timothy House

Ohio native Timothy House first began writing poetry as a teenager. As many poets, he began writing poetry to his girlfriend. He quickly found other topics to write about as well with a dream of someday writing a book. That dream became a reality in 2007 when he published Definitions. The book was his way of defining the world around him. The book contained poetry from nearly 20 years of writings. After the book was published Tim grew more comfortable with his writing and began to expand to writing fiction composing music and sound effects to his poetry. In collaboration with Wilderside Studio's in Nashville, TN, Tim released his first album of poetry with these effects and music. It became an instant hit. The Album was released in November of 2009 and at that time Tim was well on his way to completing his next book as he toured all over the United States performing his poetry in cities such as Chicago, Memphis, Nashville, New York City, Baltimore, Boston and many more. In 2010 Tim began writing his first novella Love Notes which was part of a larger project Apollo's Flame which featured poetry, short stories, and that novella. Tim performed one of his signature pieces In The City by The Mighty River while in Memphis. While there he wrote one of his most loved stories Old Man and the Moon. A story of an man who is dying and passes his great wisdom on to others. The story was published in August 2010 and was Tim's first fictional piece published. It was also part of Apollo's Flame which was published in November 2010. Love Notes was published first as just the novella in ebook form shortly afterward. Bookstores requested Tim publish a book with Love Notes and the short stories that were in Apollo's Flame on its own without the poetry so came the first edition of Love Notes.

As the new year of 2011 came so came a flurry of new stories. Tim began working a new short story for Poe Fest which was a celebration of Edgar Allan Poe's birthday. The story mirrored the writing of Poe with circumstances of his death wrapped up into a modern day eerie tale of aliens and dementia from being poisoned. Several other stories followed which would become part of the next version of Love Notes published in April of 2011. It had the same stories as the first version with several more stories. The 2nd version has several stories not available in Apollo's Flame. Shortly after the new Love Notes was released Tim completed his latest novella From My Hear to Yours, an enduring love story of adventure and strength through trying times. Their love and great virtue inspires many around them to do good works. This book also features five short stories in addition, three of which were released at the same time as $.99 ebooks. A soldier's story, Tears of a Green Eyed Angel, and Visitor's from Yubarri. As his new books were released Tim is already working on his next novella Pieces of the Puzzle.

In addition to a writer Tim is also a musician, song writer, and composer. He performs and composes music in several genre including, rock, country, jazz, blues, and classical. He is currently working on several songs and classical pieces set for release in the coming future.

Tim has great passion in writing and while he has received many awards and is nominated for more Tim states, "I don't write for awards nor for glory. I don't write to be a member of a group but rather to touch the human soul. To entertain, to inspire. When you touch someones day, when they grow from your words then this is a far greater award. I believe that art is as necessary as a breath of air for our lives, our souls, and physical well being." Tim's voice for humanity shines brightly through his stories. He is an extremely eclectic writer who has pieces in several genre such as romance, drama, sci-fi, and horror.

Tim enjoys hiking and photography and often writes in places on the trail that inspire him.

Reviews of Love in the Big Apple by Timothy House

You have subscribed to alerts for Timothy House.

You have been added to Timothy House's favorite list.

You can also sign-up to receive email notifications whenever Timothy House releases a new book.