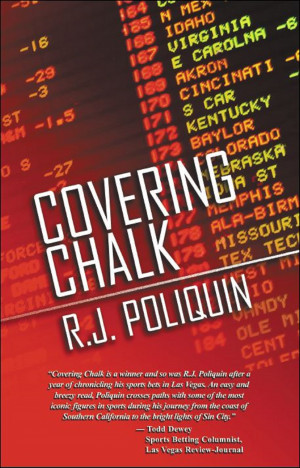 Covering Chalk: The True Experiences of a Sports Gambler trying to pick winners

R.J. Poliquin is a senior project manager in Las Vegas, Nevada, and has been intimately involved in the construction of many of the strip’s premier projects, including; Bellagio, The Wynn, Mandalay Bay, Green Valley Ranch, MGM Grand, Red Rock Resort, Town Square, City Center, LINQ, etc.

He grew up on the beaches of southern California, surfing, diving, and generally enjoying all water sports. For a few years he spent the summer on Catalina Island, one of California’s Channel Islands. R.J. is married with two grown children and two unruly cats. His family moved to Nevada eighteen years ago when his house became too small, the kids too large and work in California slowed down. Missing the ocean, he now gets a water fix by kayaking in the Colorado River or standup paddling in Lake Las Vegas.

You have subscribed to alerts for R.J. Poliquin.

You have been added to R.J. Poliquin's favorite list.

You can also sign-up to receive email notifications whenever R.J. Poliquin releases a new book.