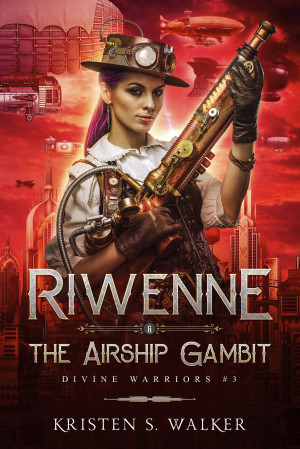 By Kristen S. Walker
A young prophet still learning her powers. A single city standing against the might of the empire. Can the dream of the rebellion last?
The fate of the gods hangs in the balance.

Riwenne & the Airship Gambit is the third book in a steampunk fantasy series for teens. If you like magical girls, giant airships, and fast-paced adventure, then you’ll enjoy Kristen S. Walker’s series of guns and gears. More
A young prophet still learning her powers. A single city standing against the might of the empire. Can the dream of the rebellion last?

Fifteen-year-old Riwenne never considered herself a prophet, but when she rescued Lyndamon City from destruction, people called her a miracle worker. Now the city she saved is under an even greater threat. When they declared their independence, the rest of the empire prepared their airships for an attack. Lyndamon is still defenseless from the last battle and they don’t have resources to rebuild.

In a desperate bid to protect her fragile home, Riwenne must find more divine warriors to fight for her cause—but not everyone with a god’s power is on her side. When mysterious warriors attack, she must persuade them to join her team or she must defeat them. Still haunted by her last kill, Riwenne is reluctant to use lethal force again.

Between negotiating with gods and her new relationship, Riwenne barely has time to rest. Her sleep is haunted by nightmares of what she’s done and visions of what could happen if she fails.

The fate of the gods hangs in the balance.

Fantasy author Kristen S. Walker dreams of being a pirate mermaid who can talk to sharks, but she settles for writing stories for teens and adults. She's proudly bisexual, Wiccan, a liberal feminist, and lives in northern California with her family and two rescued pets. To find out more about her stories, please visit kristenwalker.net.

About the Series: Divine Warriors

Reviews of Riwenne & the Airship Gambit by Kristen S. Walker

You have subscribed to Smashwords Alerts new release notifications for Kristen S. Walker.

You have been added to Kristen S. Walker's favorite list.

You can also sign-up to receive email notifications whenever Kristen S. Walker releases a new book.