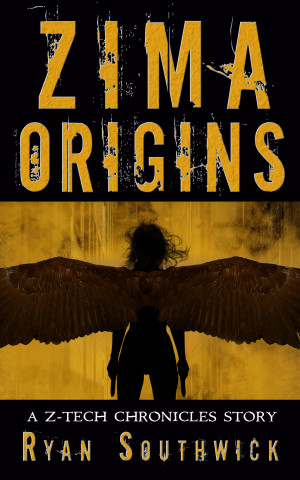 But the transition from a regime-ending killing machine to stand-up citizen is more difficult than Zima anticipated. Years of brainwashing have left her with a litany of unpredictable, lethal reactions, which force even her liberators from Z-Tech to cast her out for fear of their own safety.

Alone in San Francisco’s Mission District, Zima faces society for the first time — not as a computer inside a cyborg, whose human host managed her day-to-day interactions, but as herself. Emotions, sarcasm — even things as simple as lies — become imposing hurdles in her efforts to integrate.

But she’s nothing if not persistent. After days of searching, she meets a teenage boy and his little sister — each with needs Zima might be able to fill.

Rosa wants a big sister. Emilio is over his head as a mule for a local gang. A blonde, indestructible assassin in search of a home may be just what they need… if Zima’s homicidal tendencies don’t kill them first.
Available ebook formats: epub mobi
Price: $2.99 USD
Buy Add to Library Give as a Gift
How gifting works
Create Widget
Tags: artificial intelligence relationships family ai cartels
About Ryan Southwick

Ryan Southwick decided to dabble at writing late in life, and quickly became obsessed with the craft. He grew up in Pennsylvania and moved to a farming town on California’s central coast during elementary school, but it was in junior high school where he had his first taste of storytelling with a small role playing group and couldn’t get enough.

In addition to half a lifetime in the software development industry, making everything from 3-D games to mission-critical business applications to help cure cancer, he was also a Radiation Therapist for many years. His technical experience, medical skills, and lifelong fascination for science fiction became the ingredients for his book series, The Z-Tech Chronicles, which combines elements of each into a fantastic contemporary tale of super-science, fantasy, and adventure, based in his Bay Area stomping grounds. Ryan’s related short story “Once Upon a Nightwalker” was published in the Corporate Catharsis anthology, available from Paper Angel Press.

Ryan currently lives in the San Francisco Bay Area with his wife and two children. You can get in touch with him and see more of his work by visiting his website RyanSouthwickAuthor.com or his Facebook page.

About the Series: The Z-Tech Chronicles

In the face of a rising, ancient evil, a traumatized San Francisco waitress may be the only thing standing between humanity and oblivion.

Also in Series: The Z-Tech Chronicles

You have subscribed to Smashwords Alerts new release notifications for Ryan Southwick.

You have been added to Ryan Southwick's favorite list.

You can also sign-up to receive email notifications whenever Ryan Southwick releases a new book.