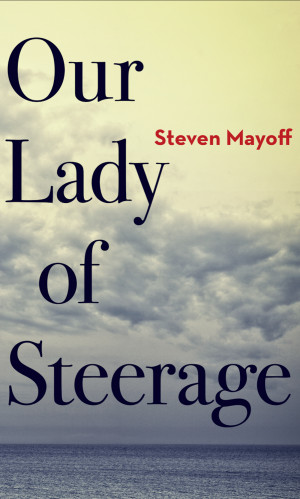 Our Lady of Steerage

Steven Mayoff was born and raised in Montreal, lived in Toronto for 17 years, and has made Prince Edward Island, Canada his home since 2001. He writes full time and his fiction and poetry have appeared in literary journals across Canada and the USA, as well as in Ireland, Algeria, France, England and Croatia.

Steven has collaborated on three short radio plays (with Paula Wing) for CBC - Call Waiting (2001), Afterlife (2002) and Phone Booth (2003) – and a stage play Bully (with Stephen Guy-McGrath), which was produced at The Theatre Centre in Toronto in 2001. His full-length play, A Promise To Repair, received a workshop production by The Cape Breton Stage Company in 2012.

He wrote the libretto for a rock musical Dorian with composer Ted Dykstra. It received numerous workshops and a successful workshop performance at the Tarragon Extra Space in 1996. He also wrote lyrics for the musical Swingstep, which was produced at the Ford Centre in Toronto in 1999. For this he was nominated for a Dora Mavor Moore Award. Other libretto work includes a one-act chamber opera Milk Bar with PEI-based composer Jim O’Leary. The opera was performed at Mount Allison University in 2014 and received a glowing review in the Mount Allison newspaper The Argosy, which said “O’Leary and Mayoff together created a score and script that complemented each other perfectly. Weighing the comedic with the critical, and the atonal and the tonal, the performance struck the right balance between an entertaining, yet meaningful story and a beautiful and conceptually interesting score.”

Mayoff’s short screenplay, The Dim Sum of its Parts, won the 2009 WILDsound One-Page Screenplay Contest. It was made into a short film for YouTube and received over 400,000 viewings.

He also adapted his novella, Fatted Calf Blues, into a feature-length screenplay. In 2011 the script was further developed to a second draft in an adaptation workshop with story editor Ken Chubb at the Screenwriters’ Bootcamp in Charlottetown. In 2012 he was invited to the prestigious Praxis workshop in at Simon Fraser University in Vancouver to work with advisor John Frizzell toward a third draft and in 2013 brought the next draft to the Praxis Summer Readings, where his screenplay was read aloud by professional actors to an audience and panel of advisors.

Mayoff has been a participant in a number of writing workshops including Seawords in PEI with Anne Simpson for poetry and fiction in 2008 and The Great Blue Heron workshop in at St. Francis Xavier University with Alistair McLeod for fiction in 2007 and 2009, as well as Daniel MacIvor for playwriting in 2010. He has attended opera workshops at Tapestry New Opera Works with Wayne Strongman and Michael Albano in Toronto in 2004 and Tone + Text in Vadstena, Sweden in 2013 and 2014.

You have subscribed to alerts for Steven Mayoff.

You have been added to Steven Mayoff's favorite list.

You can also sign-up to receive email notifications whenever Steven Mayoff releases a new book.