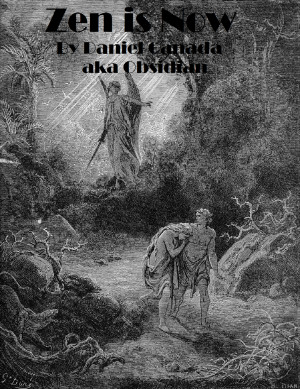 Each poem reflects my inner voice in a variety of contrasting demeanors. Some are light and jovial. Others are dark and foreboding. There are even a few deeper, metaphysical reflections. In all, I come to realize there are many disparate ways I have made my voice heard over the years. Within these pages I touch upon matters which are close to the heart; such things as love, the pain of loss, the sort of things which make you reflect deeply upon the meaning of life and its hidden influences.

Lastly, I believe you will discover Zen is Now to be a rare odyssey into the inner workings of my mind. It is my wish to take you into some of my more profound, esoteric ruminations about life and the highs and lows of everyday living in general. I hope you will also find it to be a celebration of the creative forces which shape our daily world in this grand experiment we call being.

It is my wish that this book will prove to be an affirmation that no matter which road we travel in the end we will all meet at the same summit, at that eternal state of Zen.
Available ebook formats: epub mobi pdf lrf pdb txt html
First 5% Sample: epub mobi (Kindle) lrf more Online Reader
pdb
Price: $5.99 USD
Buy Add to Library Give as a Gift
How gifting works
Create Widget
Tags: poetry fantasy poetry general poetry about poetry verse poetry of life poetry deep poetry adult poetry of soul poetry life
About Daniel Canada

Daniel Canada's foray into the wilderness of writing began in his senior year in high school, when he entered into and won the 1982 NBC Award for amateur journalism for New York City, after interviewing NBC's news reporters Marv Albert, Gabe Pressman and Larry Varas.

After wandering about in an attempt to find the meaning of life, he found himself strongly entrenched in the New York City poetry scene, reading and performing under the name Obsidian. He also co-hosted two renown open mic poetry venues in New York City, the "Times Square Shout Out" and the "Shout Out at Ottos," from 2007-2010. As a result he and his co-host were the subjects of a documentary of NPR Radio's "This American Life," entitled "Social Engineering," hosted by Ira Glass in 2008.

Daniel Canada aka Obsidian appeared on Columbia University Radio station WKCR-89.9FM, "Studio A Series," hosted by Anne Cammon Fiero, along with several members of the celebrated "Brownstone Poets." He has also soiled his hands in a little publishing, and has been twice published as a contributing poet in the anthology "Diner with the Muse," and “The Venetian Hour,” edited by Evie Ivy and sold at St. Marks Bookstore.

He has also published three other books: “The Shaitan,” an action-packed, supernatural fiction about an U.S. Army Ranger’s desperate attempt to prevent an international terrorist from launching a devastating attack upon New York with an unconventional psychic weapon, the “Hobo Handbook: Memoirs of a Homeless Poet in New York,” the story of his five years living on the mean and unforgiving streets of New York City, while plying his trade as a poet and co-host of two amazing open-mic poetry shows, and “Zen is Now,” a compilation of nearly 30 years of his poetry. All three books can be purchased at Smashwords

Reviews of Zen is Now by Daniel Canada

You have subscribed to alerts for Daniel Canada.

You have been added to Daniel Canada's favorite list.

You can also sign-up to receive email notifications whenever Daniel Canada releases a new book.