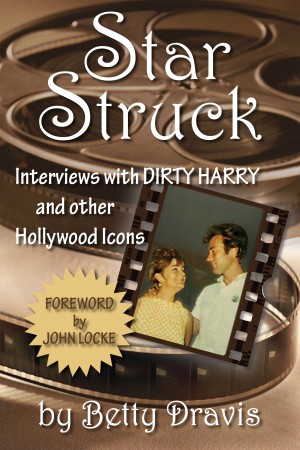 Star Struck: Interviews with Dirty Harry and other Hollywood Icons

By Betty Dravis
Rated 5.00/5 based on 1 reviews
Betty Dravis shares behind-the-scenes happenings of some of her favorite celebrity interviews. She tells what led up to the interviews and her feelings and impressions during and after the meetings.

Among those interviewed were: Actor/Director Clint Eastwood, Senator Ted Kennedy, 40's Star Jane Russell, Singer/Actress Tanya Tucker, Mayor Joseph Alioto, and Actress Ann Sothern. More
Betty Dravis shares behind-the-scenes happenings of some of her favorite celebrity interviews. She tells what led up to the interviews and her feelings and impressions during and after the meetings.

"As always, Ms Dravis's interviews have a warmth, charm and delightful quirkiness that draw you in, fill you with enjoyment, and leave you wanting more. Ms. Dravis always adds that special personal touch that leaves the reader with a true sense of who these icons really are as people, not just as idols.” - Karen McCord Zabalaoui, Texas, Amazon Top Reviewer

“…Dravis offers us a very human picture of the reporter conducting interviews. At times it is entertaining, as for example when she reflects on her "bad hair day" when meeting Clint Eastwood. At other times, it is poignant, as when she reflects on her meeting with Senator Ted Kennedy years before his prolonged struggle with cancer. But in all her anecdotes, Dravis offers readers a picture of how the interviewer, far from being a neutral questioner, is affected by the meeting with her subjects.” - Fritz Ward, Southern California, school teacher and avid day-hiker

WHAT LEGENDARY AUTHOR JOHN LOCKE SAYS ABOUT BETTY AND "SIX-PACK OF BLOOD":

"I know Betty Dravis as a multi-genre writer, but no matter what genre she writes in, make no mistake, Betty's a treasure, far as I'm concerned. This collection is special because it offers you a glimpse into the 'other' mind and character of this author." - John Locke, famous creator of the fictional character Donovan Creed and the first self-published author to sell a million e-books.

"This is a feast expertly cooked up by master chefs venturing into the dark side designed to leave us captivated, enthralled and horrified. The perfect dish to accompany your six-pack...or if you prefer, a fine wine." - Armand Mastroianni, Producer/Director, Silver Screen Pictures, Hollywood

She is also a retired newspaper publisher and career journalist who hosted a Cable TV talk show. She is a celebrity interviewer and author of nine books, including her latest humorous short story, "The Search for Boby McGee, two e-books, "Six-Pack of Blood" (with Barbara Watkins) and "Star Struck: Interviews with Dirty Harry and Other Hollywood Icons." Three are novels in print and e-book format: "1106 Grand Boulevard," "The Toonies Invade Silicon Valley" and "Millennium Babe: The Prophecy." Two others are nonfiction in print: "Dream Reachers" and "Dream Reachers II," collections of celebrity interviews (with Chase Von).

Dravis also wrote three short stories that were consistent best-sellers in the Amazon Shorts program and had short stories published in the anthologies "Every Child is Entitled to Innocence," "Sweet Sunshine," "Just Our Best Short Stories 2005." She recently finished her first full-length horror/paranormal book "The Hiss of Evil " (currently under deadline with publisher).

She is the devoted mother of six (two are now angels), grandmother of nine, and has five great-grands and one great-great grand. Dravis, a decades-long resident of Silicon Valley, currently resides in the Central Valley of California. She's a Kentucky Colonel, an honorary title bestowed by the Governor of Kentucky, featured in two Who's Who books and former San Jose (CA) Woman of Achievement. She's also a member of American Author Association (AAA) and Dames of Dialogue, a former member of Sigma Delta Chi and San Jose Newspaper Guild and is an Amazon and Midwest Books Reviewer.

Her most recent awards are: "BEST PARANORMAL/HORROR BOOK," presented for "Six-Pack of Blood" by Dimi Nakov, producer/director of ZODIAC ENTERTAINMENT of New Zealand: TOP 20 IN BEST OF WOMEN'S FICTION, presented by Heart Press; and placed 18th in the 4th ANNUAL INTERNATIONAL SHORTY AWARDS (author division).

Betty is also working to promote Stem Cell Research, along with her daughter Mindy James whose son Seth suffered a spinal cord injury in a motocross practice race. Read Seth's story on the Internet at Bridges to Hope.

Of writing, Betty always says, "It's exhilarating--like sliding down a rainbow with a huge smile on my face, filled with love for the whole of God's magnificent creation." She laughs as she adds: "Yeah...and marketing is like trudging through a field of 'chewed' bubblegum on a hot, sticky day." :-)

"Betty Dravis is a fantastic mix of Shirley Jackson, Edna Buchanan and Janis Joplin. Don't ask me how I came up with that unlikely comparison––I just feel it, and I haven't been drinking much tonight...." - Mark LaFlamme, author of "Dirt: An American Campaign", Box of Lies and more.

"Betty Dravis's ability to present real people, places, and things in the midst of a fantasy story is very close to what I strive for in my own writings. Characters with last names and problems who live in real places, but still have fantastical things happen to them, make for a wonderful story. "The Toonies Invade Silicon Valley" is truly a modern "James and the Giant Peach" or "Charlie and the Chocolate Factory" kind of tale." - J. H. Sweet, author of The Fairy Chronicles.

Bestselling author John Locke sums up Betty quite well in his Foreward. She is a relentless, gracious, amazing woman; a crisp writer who flawlessly weaves her own humble, humorous story into her narrative. Star Struck is a quick, satisfying read that will appeal to all while giving us a glimpse into Betty's incredible life as a journalist and perhaps more importantly, as a single mother to six children. Two thumbs up on aa great read and a life well-lived. I'm heading to 1106 Grand Boulevard, I hear its an incredible ride.

You have subscribed to alerts for Betty Dravis.

You have been added to Betty Dravis's favorite list.

You can also sign-up to receive email notifications whenever Betty Dravis releases a new book.