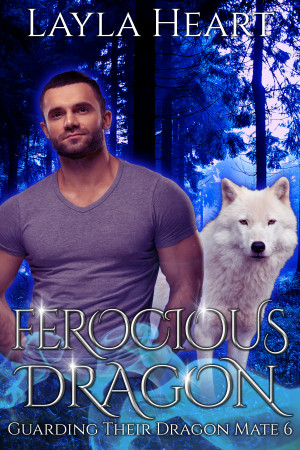 After learning of the existence of her half-sister, Sophia had to rethink her whole life, who she is and wants to be. Leading to her finally taking the antidote against the anti-shifting elixir and connecting with the dragon inside her.

Now Sophia and her hoard are ready for the final step, find the research centre hidden in the mountains, free the missing earth dragons and take out anyone who stands in their way. The plan is as effective as it’s simple.

But when they arrive at the research centre, things don’t exactly go as planned. The handful of guards outside the place are easy enough to take down, but when they’re about to enter the building, they realise they’ve walked right into a trap. A trap meant to catch them and take them out so that the renegade fae can take over the area.
Can they survive, or will this be the end of their journey?

This is the sixth and final novella in the Guarding Their Dragon Mate serial, a six episodes long reverse harem #WhyChoose story. This novella may include any of these elements: steamy scenes, ‘I need tissues NOW’ moments, cries of ‘why, oh, why’ and cliffhangers that make you bite your nails (and curse the author).
This story takes place in the same world as the Lughnasadh Elite Academy and happens after the events from the other series. Both series can be read stand-alone, they are about different characters, but they are connected.
Available ebook formats: epub mobi pdf
First 10% Sample: epub mobi (Kindle)
Price: $2.99 USD
Buy Add to Library Give as a Gift
How gifting works
Create Widget
Tags: paranormal romance witches dragons werewolves shifters reverse harem

About the Series: Guarding Their Dragon Mate

Sophia thought she’d be fighting the fae army, not her attraction to four handsome rebels…

Orphaned at twelve, half-blood Sophia, part witch, part water dragon, spent most of her life as a member of the secretive dragon rebel army, trying to protect kids like her. But now the war against the fae is won, the new kings have chosen her to rebuild the war-torn dragon lands.
First problem? She has no experience leading anyone.
Second problem? The area is dangerous, filled with renegade fae soldiers, still loyal to the old fae king.
Third problem? Or should that be her first problem? The team assigned to help her might be more of a distraction than an asset.

One spoiled fire dragon who won’t take orders from anyone. One broody air element witch carrying a lot of pain from his past. One soft-spoken werewolf with hidden strength. And one mysterious fae… Four very hot sources of trouble.

Can she save her people, rebuild what was lost, and protect her heart all at the same time?

You have subscribed to alerts for Layla Heart.

You have been added to Layla Heart's favorite list.

You can also sign-up to receive email notifications whenever Layla Heart releases a new book.