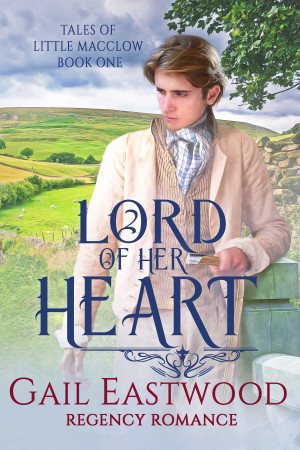 Lord of Her Heart, a Regency Romance

By Gail Eastwood
Tales of Little Macclow—tucked away and maybe touched by magic...

Tom Hepston returns to Little Macclow after 14 years, but he hasn’t come willingly and has no plan to stay. He thinks the war has made him a madman no woman could love. Sally Royden’s heart broke the first time he left. Now that he’s back, can they renew their friendship? Or more? Or will her heart be broken twice by the same man? More
Tales of Little Macclow— tucked away and maybe touched by magic….
Lord of Her Heart (Book One)

An unexpected return. A new risk for old friends.

As Little Macclow prepares to celebrate May Day, Tom Hepston’s arrival stirs expectations and speculation. Tom left the village fourteen years ago. Now he is back, but he hasn’t come willingly and he has no plans to stay. While he’s proud of the naval career he has left behind, he believes the physical and mental wounds that ended it have made him a madman no woman could—or should—love. Can he leave again before everyone sees the broken man he has become?

Sally Royden’s young heart broke when Tom left the first time. After years of hoping for his return, she now leads a full life caring for her sister and serving as the village seamstress. Tom’s experiences have changed him. Dare Sally hope for renewed friendship? Or more? Or will her heart be broken twice—by the same man?

Part of the proceeds from this book will be donated to the Wounded Warriors Project and other non-profit organizations that support those fighting the challenges of PTSD.

A native New Englander, Gail Eastwood spent almost 20 years as a journalist, theatre critic and PR consultant, among other jobs, before she finally sat down to write and sell her first novel, achieving her childhood dream. Published by Signet, that first book earned several honors including The Golden Leaf Award for Best Regency, 1994. Her other books have been up for numerous awards, and Gail was nominated for Romantic Times Magazine’s Career Achievement Award in the Regency category two years in a row.
Hailed by reviewers as “brilliantly versatile” and a “master at painting pictures of Regency life,” Gail was acclaimed for pushing her genre to new levels with the emotional depth and original plots in her books. She dropped out of the field for ten years, but now she’s back! She taught Writing the Romance for Brown University, and continues teaching writing and doing editorial coaching. A graduate of Case Western Reserve University, Gail lives in Rhode Island with her actor/attorney husband, two sons, and the family cat. She loves writing and researching, but stubbornly refuses to give up her interests in theatre, dance, costuming, the medieval period, and of course, the beach, even though she now has no time!

Sweet with a little sizzle, the Tales of Little Macclow are "small village" Regency romances linked by a common setting and recurring characters. They follow a shared chronology and, while best read in order, they are complete stand alone romances that will warm your heart. Little Macclow is a tiny village off the beaten path in scenic Derbyshire, where time seems to stand still. As people come and go, the cause of true love sometimes needs a little assist. The villagers believe that "The Lady, " a mysterious being who might be an angel, or a fairy, or a very benevolent ghost (no one knows), sometimes intervenes to help make sure the obstacle course of love turns out as it should.

Reviews of Lord of Her Heart, a Regency Romance by Gail Eastwood

You have subscribed to Smashwords Alerts new release notifications for Gail Eastwood.

You have been added to Gail Eastwood's favorite list.

You can also sign-up to receive email notifications whenever Gail Eastwood releases a new book.