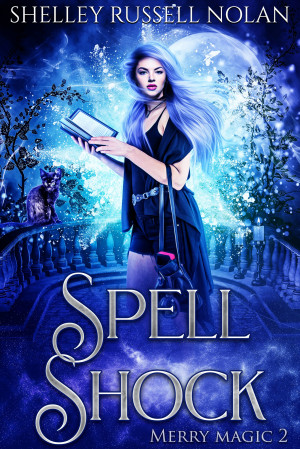 By Shelley Russell Nolan
Rated 5.00/5 based on 1 review
Magic always comes with a price.

Merry must master the elemental Earth, but magic has a cost, one she will find hard to bear. More
Magic always comes with a price

Merry has the first charm she needs to remake the transportation spell to take her home, and four more to get. With the mage guild still after her, she knows reaching the rest of the elemental focal points will not be easy. Not even she expected to be drawn into a plot to destroy the guild.

On the way to the Earth focal point, Merry and her allies are caught up in a Tiranian lord’s plan to wrest power from the mages. Her growing ability with Wind magic will not be enough to save them. Faced with a life of servitude, her magic bound to another’s will, she will have to decide what she is fighting for. Her freedom or the fate of those already enslaved?

As an enemy becomes an ally, and with time running out to stop the witch hunters gaining access to Tirana, Merry must master the elemental Earth to have any hope of escape. But magic has a cost, one Merry will find hard to bear.

Shelley Russell Nolan is an avid reader who began writing her own stories at sixteen. Her first completed manuscript featured brain eating aliens and a butt kicking teenage heroine. Since then she has spent her time creating fantasy worlds where death is only the beginning and even freaks can fall in love.
Shelley is a speculative fiction author with two paranormal fantasy series currently published, as well as the first book in a post-apocalyptic urban fantasy series that was released September 2019 with the second book to be released in 2020 and is both traditionally and independently published.
Born in New Zealand, moving to Australia with her family when she was seven, Shelley currently lives in Central Queensland, Australia, with her husband and two young children. They share their home with two wrecking ball kitties, a deformed budgerigar and a big lug of a dog.

About the Series: Merry Magic

What would you do if you were accidentally transported to another world and discovered you were a witch?

Very enjoyable tale. The characters are fairly well developed and the story moves forward at a good pace without feeling rushed. Well worth the read.

You have subscribed to alerts for Shelley Russell Nolan.

You have been added to Shelley Russell Nolan's favorite list.

You can also sign-up to receive email notifications whenever Shelley Russell Nolan releases a new book.