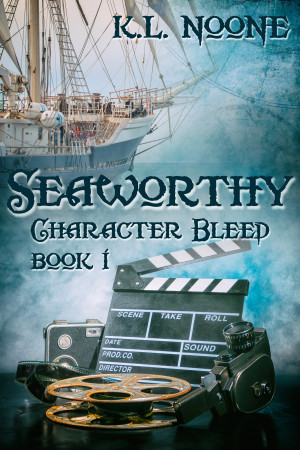 By K.L. Noone
Adult

An epic motion picture! A historical gay love story! And a film that’ll change its stars! Aging action star Jason has a chance at a serious role. First catch? He’s playing a ship’s captain. Second? His way too adorable co-star. Colby’s thrilled to tell this story. But past scars make filming hard -- until Jason takes his hand. Jason could be everything he wants, if he can believe it. More
An epic motion picture! A gay Napoleonic War love story! Ballrooms and battles at sea! Romantic happy endings on the silver screen! And a film that’ll change everything for its stars ...

Jason Mirelli can’t play adrenaline-fueled action heroes forever. He’s getting older, plus the action star parts have grown a little thinner since he came out as bisexual. This role could finally let him be seen as a serious dramatic actor, and he needs it to go well -- for his career, and because he’s fallen in love with the story and the chance to tell it.

Colby’s always loved the novel this film’s based on, and he leapt at the chance to adapt it, now that he has the money and reputation to make it happen. But scars and secrets from his past make filming a love story difficult ... until Jason takes his hand and wakes up all his buried desires. Jason could be everything Colby’s ever wanted: generous and kind, a fantastic partner on set, not to mention those heroic muscles. But Colby just can’t take that chance ... or can he?

As their characters fall in love and fight a war, Colby and Jason find themselves falling, too ... and facing the return of their own past demons. But together they just might win ... and write their own love story.

You have subscribed to alerts for K.L. Noone.

You have been added to K.L. Noone's favorite list.

You can also sign-up to receive email notifications whenever K.L. Noone releases a new book.