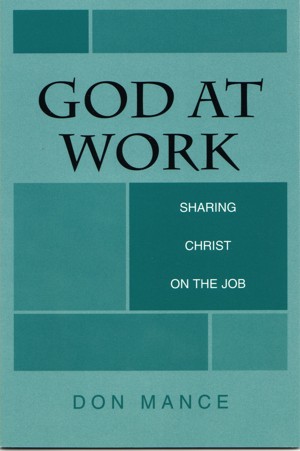 God at Work: Sharing Christ on the Job

By Don Mance
This book was written to shatter the myth that one must enter traditional full-time ministry in the church to impact the world for Jesus Christ. A book to assist you in sharing your faith with your co-workers. More
This is a book to encourage the Christian that he or she may impact the workplace with godly influence. It details how to allow God to form godly character in him or her and allow the Spirit of God to pour out on a daily basis to the broken and hurting people in the workplace.
Download: epub mobi (Kindle) pdf more Online Reader
rtf lrf pdb txt
Price: Free! USD
Add to Library
Create Widget
Tags: spiritual growth god jesus christian living evangelism marketplace ministry
About Don Mance

Don Mance was born and raised in Albany, New York. He served in the United States Air Force from 1988-1992, in the Netherlands and the Upper Peninsula of Michigan during the end of the Cold War. Shortly after leaving the Air Force in 1992, Don gave his life to Jesus Christ. He has preached in several churches in Upstate New York and has also done a short term mission to the Dominican Republic. A unique set of circumstances immediately following September 11, 2001 thrust him into a role of spiritual leadership at work. It was this experience that compelled him to write God at Work: Sharing Christ on the Job. Don's second book, The Great Exchange, is an overview of the spiritual dynamics that result from a decision to live for Christ. In August 2014, The Great Exchange was translated and published in Dutch as De Grote Uitwisseling. Marching Orders is Don's third book and was released in August 2015. The book explores the parallels between Christian life and military life. Wee Forrest is Don's latest book. It is a loving tribute to his late father. Don's wife, Mandi, is originally from Glasgow, Scotland. They frequently travel there together.

Reviews of God at Work: Sharing Christ on the Job by Don Mance

You have subscribed to alerts for Don Mance.

You have been added to Don Mance's favorite list.

You can also sign-up to receive email notifications whenever Don Mance releases a new book.